Our Heritage at Wakefields Jewellers

A Penny Farthing and five pounds

John Wakefield, Melanie and Dominic’s great-grandfather, made the journey from Wiltshire to Horsham in the late 1890’s. Arriving by train with little money and prospects, he is said to have ridden into Horsham on a Penny Farthing, with five pounds in his pocket. He found work as an apprentice of one of five watchmakers in the basement at Jury Cramp’s shop on West Street, eventually advancing to senior watchmaker. 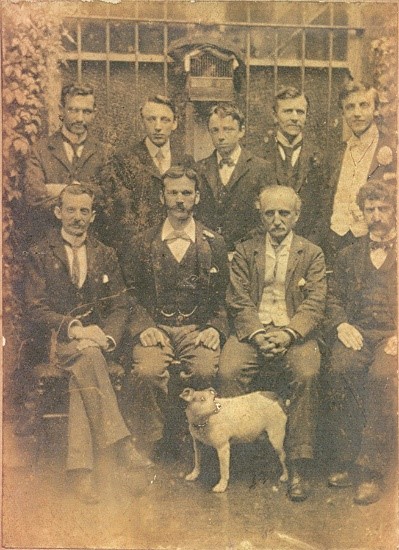 This photo from 1901 shows John (back row 2nd from right) with the staff from Jury Cramp’s Jewellers.
1903

Driven by his entrepreneurial spirit, John desperately wanted to see the Wakefield name above his own door. He soon married a lady called Sarah who was working at the sweet shop opposite at 59 West Street, later buying the shop in 1903 when the owner, Mrs Jupp, retired. John’s wife Sarah ran the sweetshop, whilst John continued to hone his skills as a watchmaker, making future plans to own his own jewellers and watchmakers. 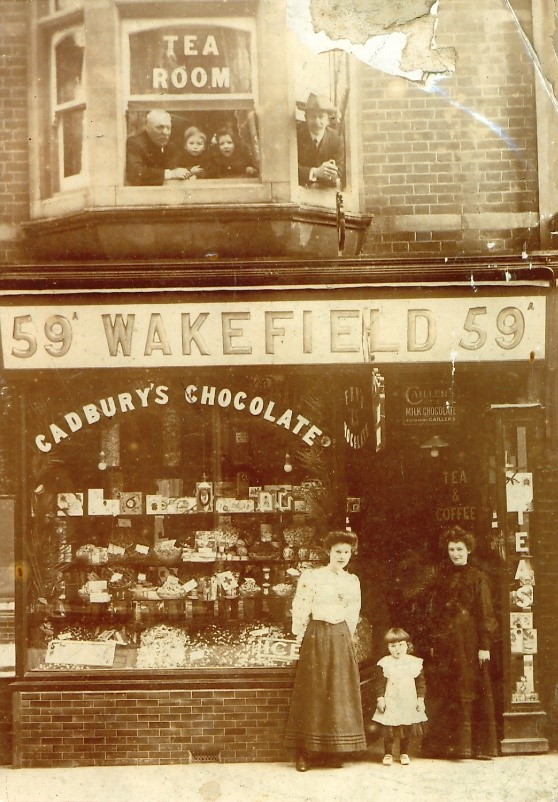 John finally realised his dream of owning his own business and opened his jewellers and goldsmiths in 1911. This shop was originally located at 13 West Street, Horsham, which is currently a walk through to The Forum.

As well as watches, clocks and jewellery, the shop included an optician service and sold all manner of gifts and oddities, from silver cutlery sets to barometers. During the Great War, munitions shells were even made in our workshop, with women employed to polish shell cartridges. 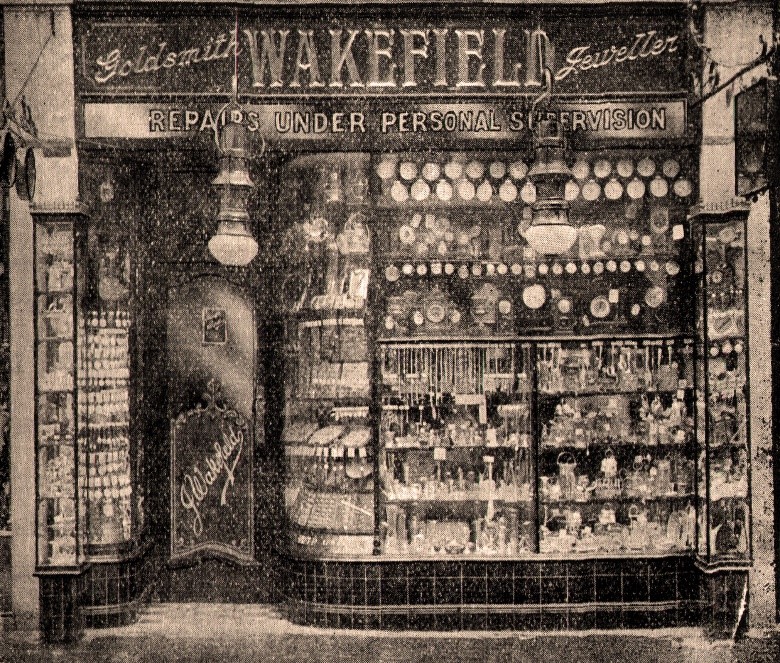 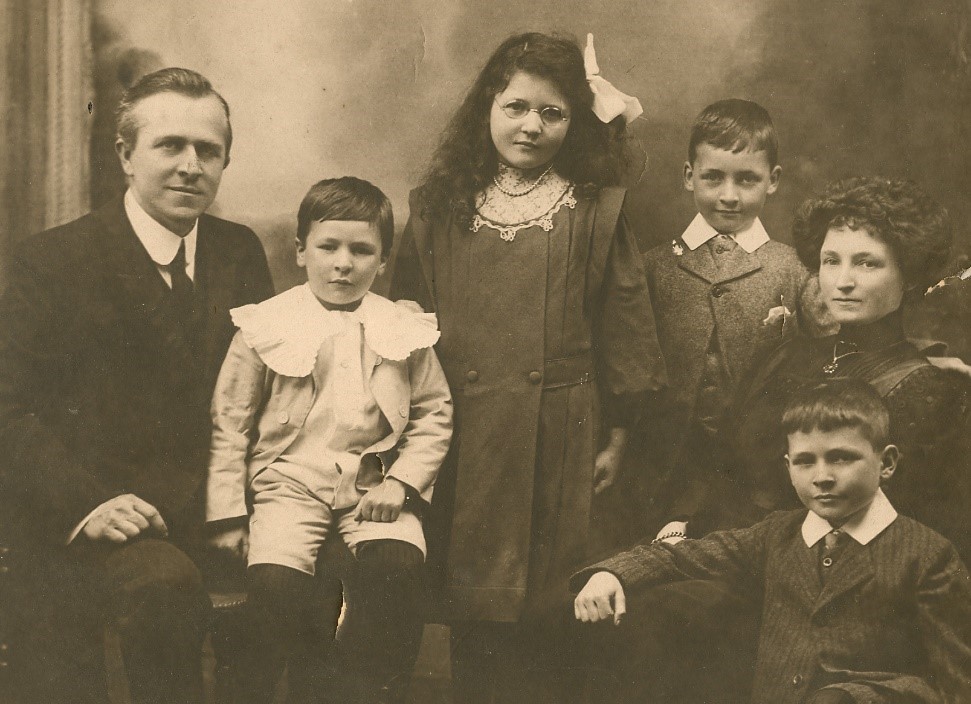 This photo shows John and Sarah pictured with four of their six children. Melanie and Dominic’s grandfather James (known to all as Jim) Wakefield was the eldest son of the six (seated bottom right), succeeded the jewellery shop years later.
1912/1913 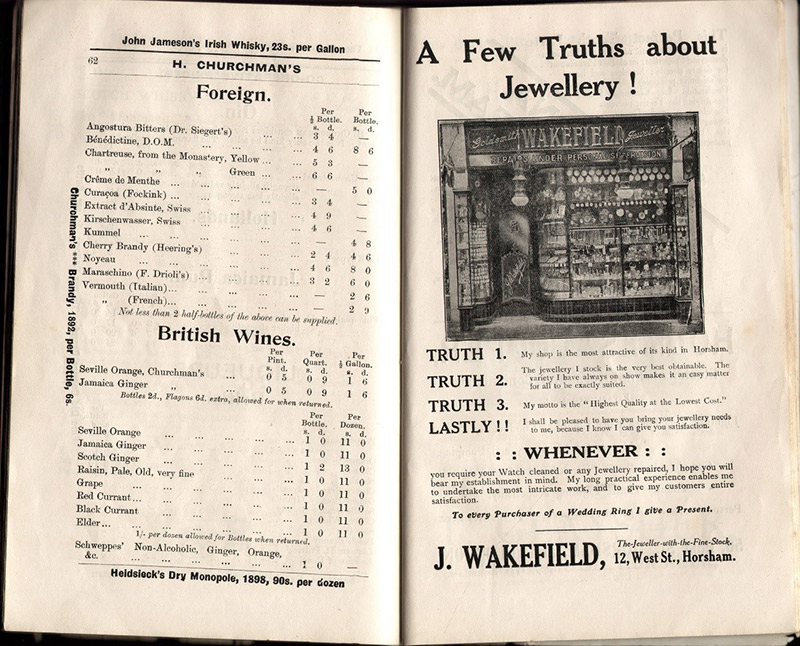 This image shows one our very first adverts in 1912. 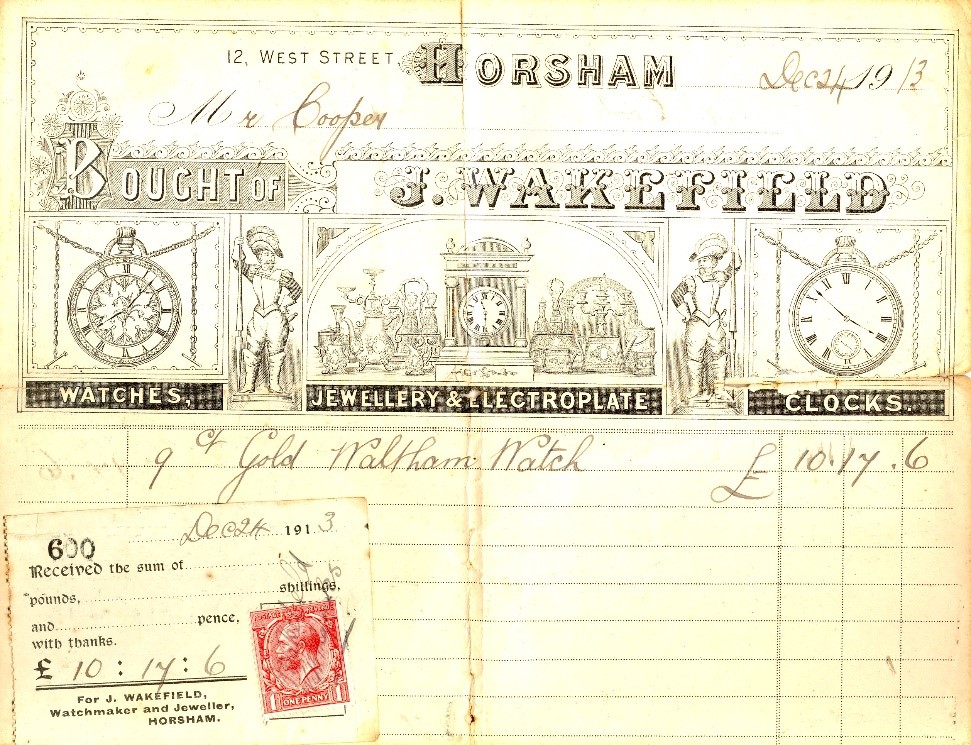 In 1935 John Wakefield moved the store into its current location at 11 West Street, which was the site of Boots The Chemist at the time. The store still utilizes some of the original Boots mahogany cabinets for display to this day. 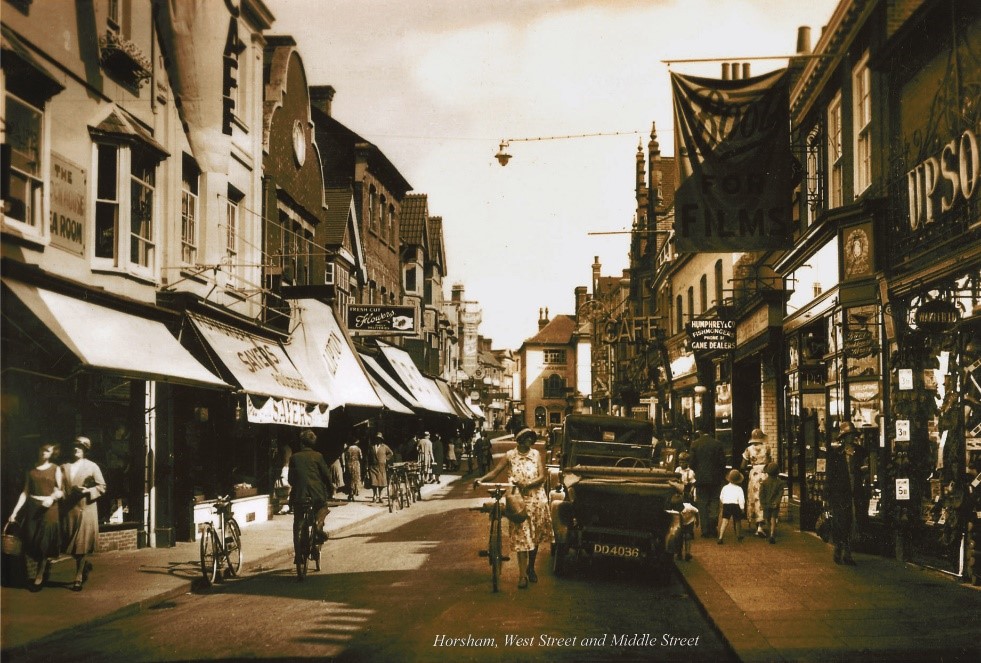 Jim Wakefield took over the jewellers in the 1930’s, whilst John Wakefield started expanding his empire locally to accommodate each of his sons. Fortunate in his flair for business, John opportunistically bought the butcher’s shop at 59a West Street (next door to his sweet shop), making an offer whilst the owner was suitably inebriated. He later turned both units into Wakefields Outfitters, a business which also survives to this day. 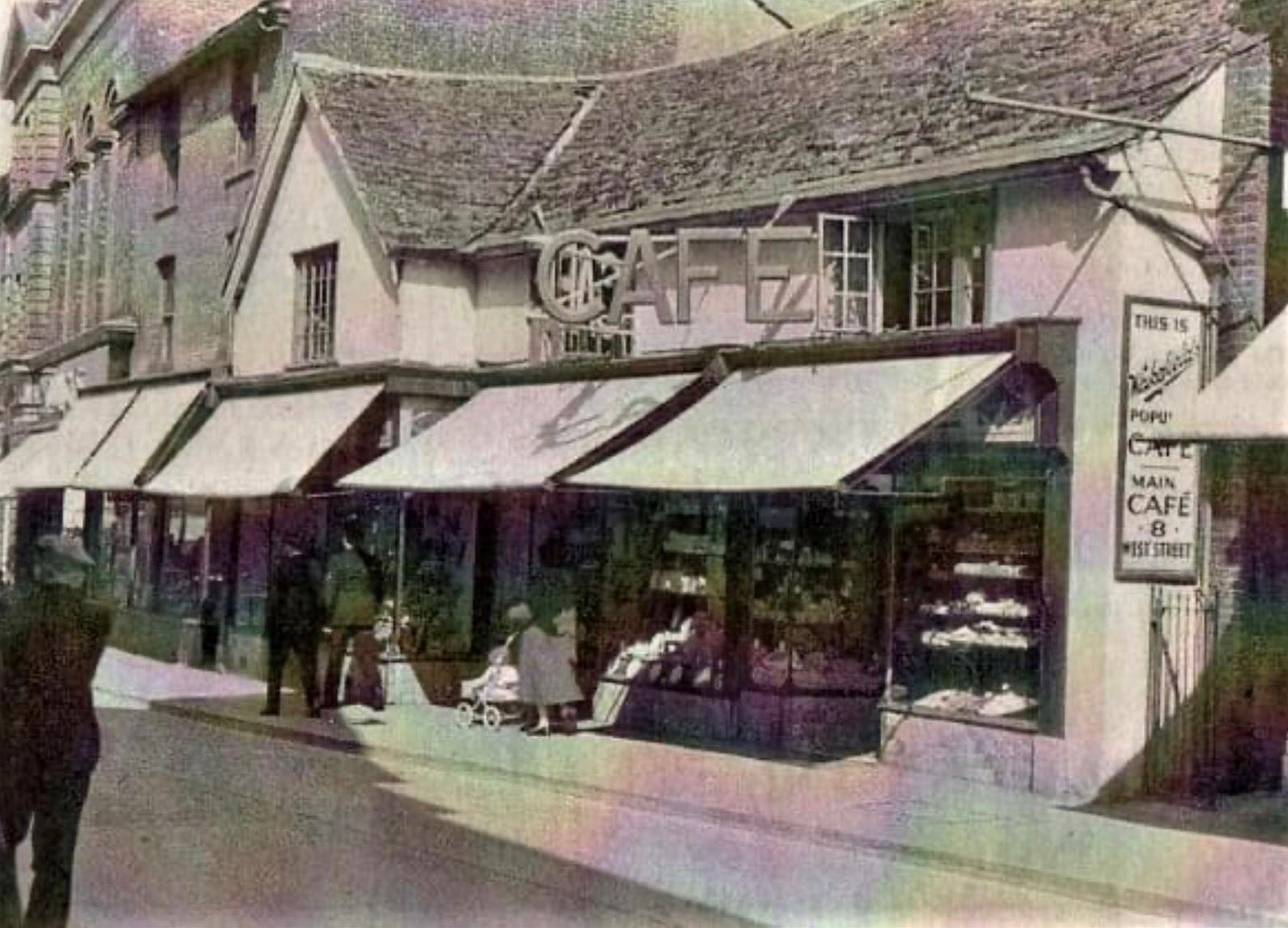 The Wakefields dominated business in Horsham town for decades. In addition to the sweet shop, outfitters and jewellers, John Wakefield opened a China shop in East Street as well as operating a huge café, running from the current Clarks shoe shop unit, all along the first floor to the current Wakefields Jewellers site. The cafe offered shoppers a chance to relax, eat and indulge in a cup of coffee, freshly roasted on the premises. It also catered for wealthy clients at private residences, including the Queen at Windsor and was among the country’s largest importers of Mumm Champagne.

Whilst John continued to build upon the Wakefield name, Jim Wakefield gained a reputation as being a stickler when it came to maintaining high standards at the jewellers. An advocate of impeccable customer service, John even introduced a pulley system that ran from the front of the shop into the workshop to further speed up repairs turnaround times. Whilst the pulley system may be long gone, the workshop still remains an integral part of the Wakefields business to this day. 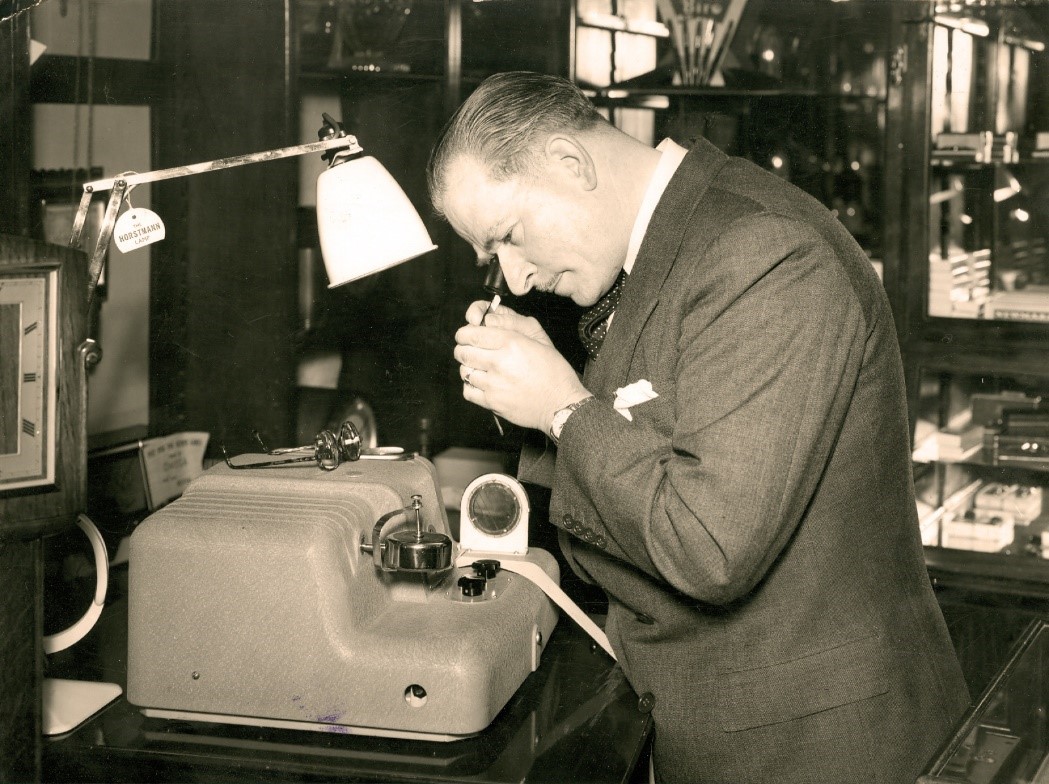 John Wakefield passed away in 1959, leaving a legacy to his 4 sons. 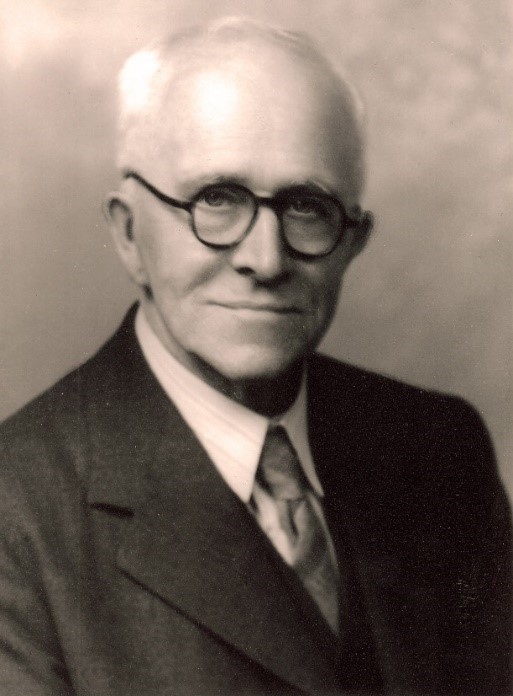 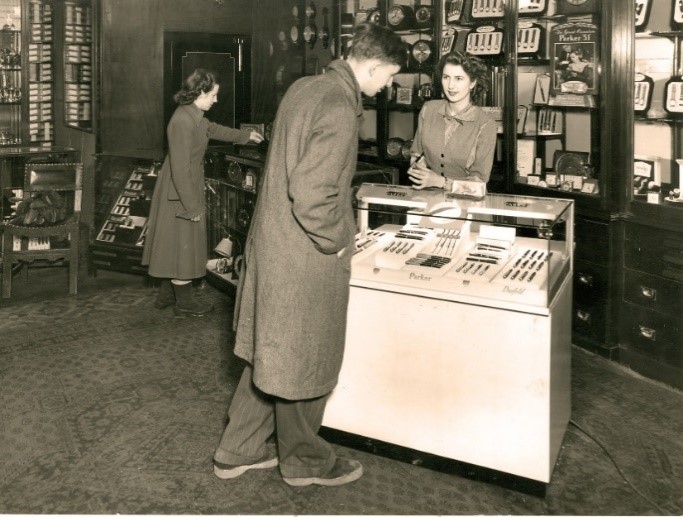 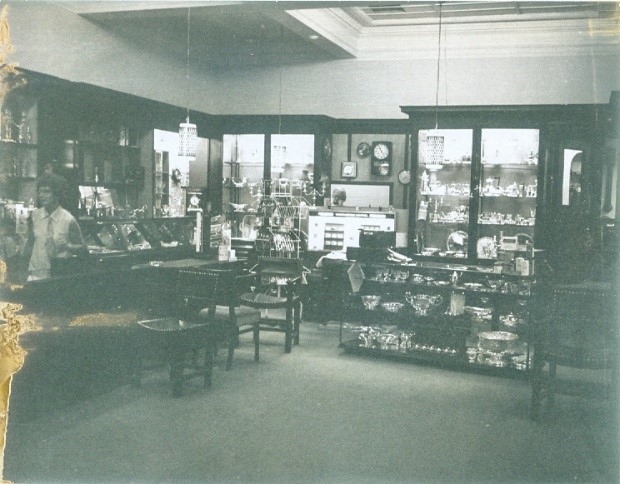 Jim’s son, Graham Wakefield (Melanie and Dominic’s father) joined the business from school in 1965, working alongside Jim for many years. He trained at the prestigious CFH School in Switzerland (as did Melanie Wakefield) and also apprenticed at Parkhouse & Wyatt (now Laings) in Southampton. This image shows Graham training in Switzerland in 1966, Melanie Wakefield following in his footsteps in 1990.

You would expect working at a jewellers in a small town like Horsham to be very routine and ordinary, but Melanie and Dominic can recall many unbelievable anecdotes their father shared with them over the years. When Graham first started work at the jewellers, he was still having to go to homes and cut rings from the fingers of people who had died, as the family wanted to retrieve the jewellery. He faced some scary situations in his years at Wakefields, including being pistol whipped. During another failed robbery, someone even tried to escape the police by jumping through the glass at the front of the shop! 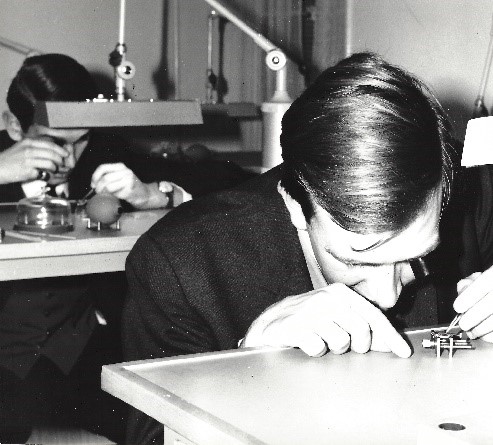 Gradually, the other Wakefields businesses fell by the wayside. Changing fashions for dining out meant that the café’s popularity waned in the 1970s. Others closed as relatives wanted to pursue careers away from the High Street. The gentleman’s outfitters was bought about 25 years ago, although it retained the Wakefields name and survives to this day. 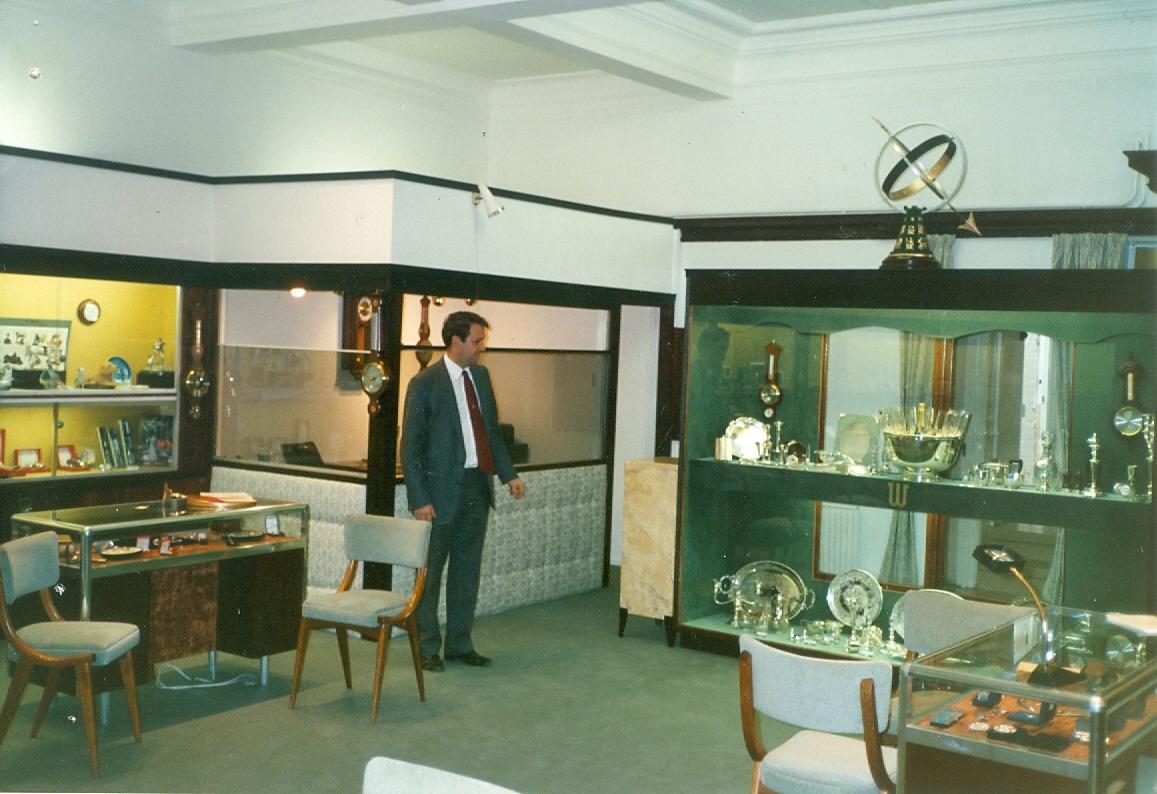 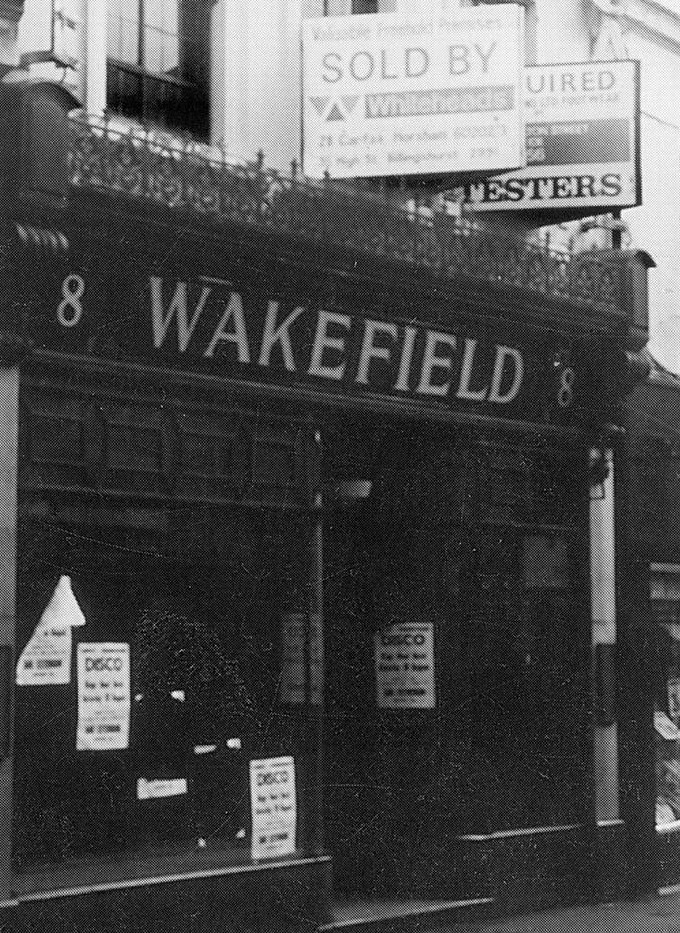 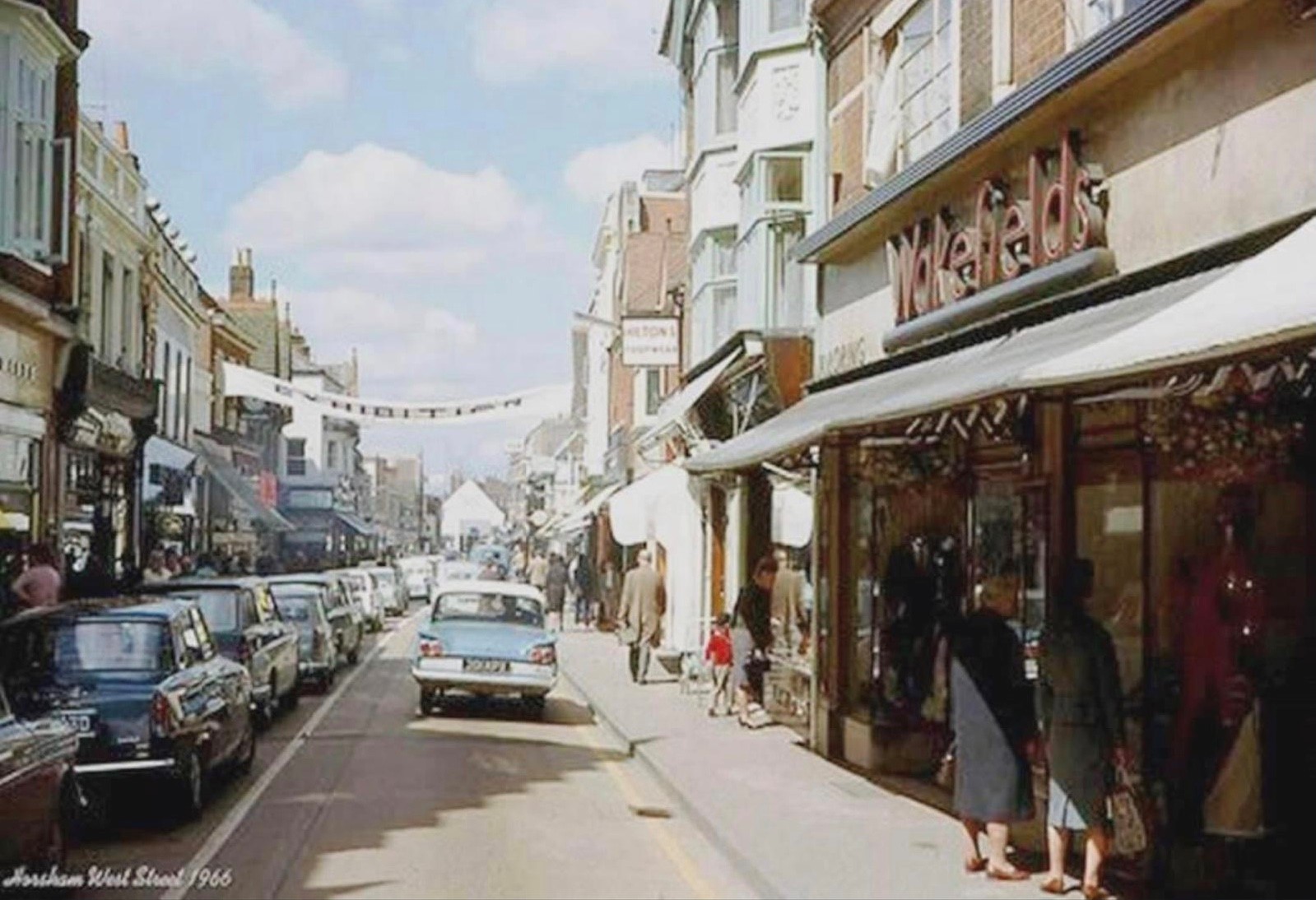 This photo from 1966 shows Wakefields Outfitters, which still remains on West Street to this day.
1985

Fast-forward to the 80s, Melanie and Dominic Wakefield started their own journey at Wakefields as Saturday staff. Following in the footsteps of their father, Melanie decided to join the business in the late 80s studying gemmology and diamond grading. Whilst Dominic also joined the business after studying accountancy at university. 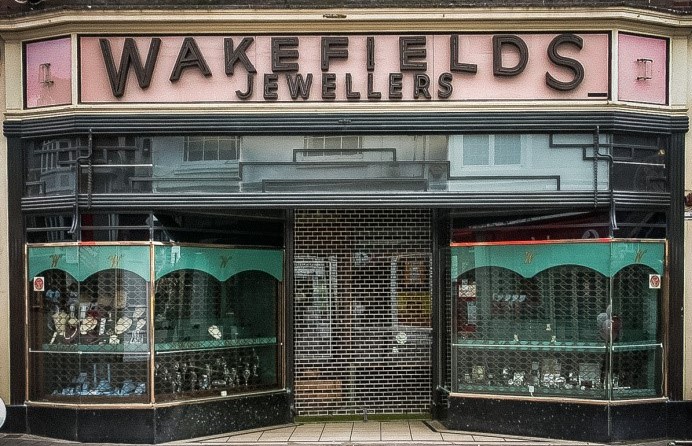 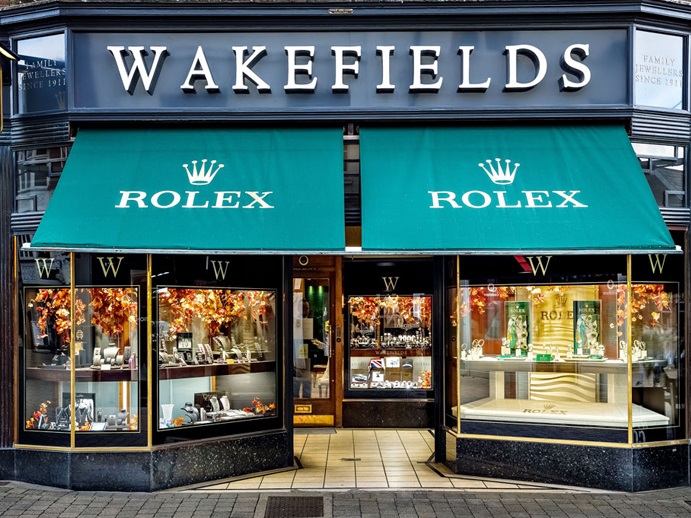 Wakefields has seen many changes inside and out over the years. The original art-deco signage endured the decades, until it was updated in 2011 for a more contemporary look.
1996

Following many successful years at Wakefields, Graham handed the reins to his daughter and son and took a back seat within the business, still deciding to keep busy by providing valuations for his loyal customers. 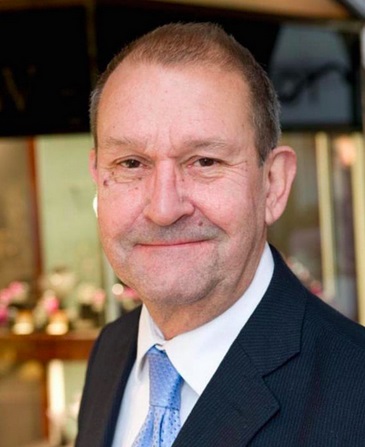 This change meant that Wakefields became a fourth generation, family-run business, continuing John Wakefields’ legacy. The millennium also welcomed another generation of five little Wakefields to the family tree, to hopefully carry on this tradition. 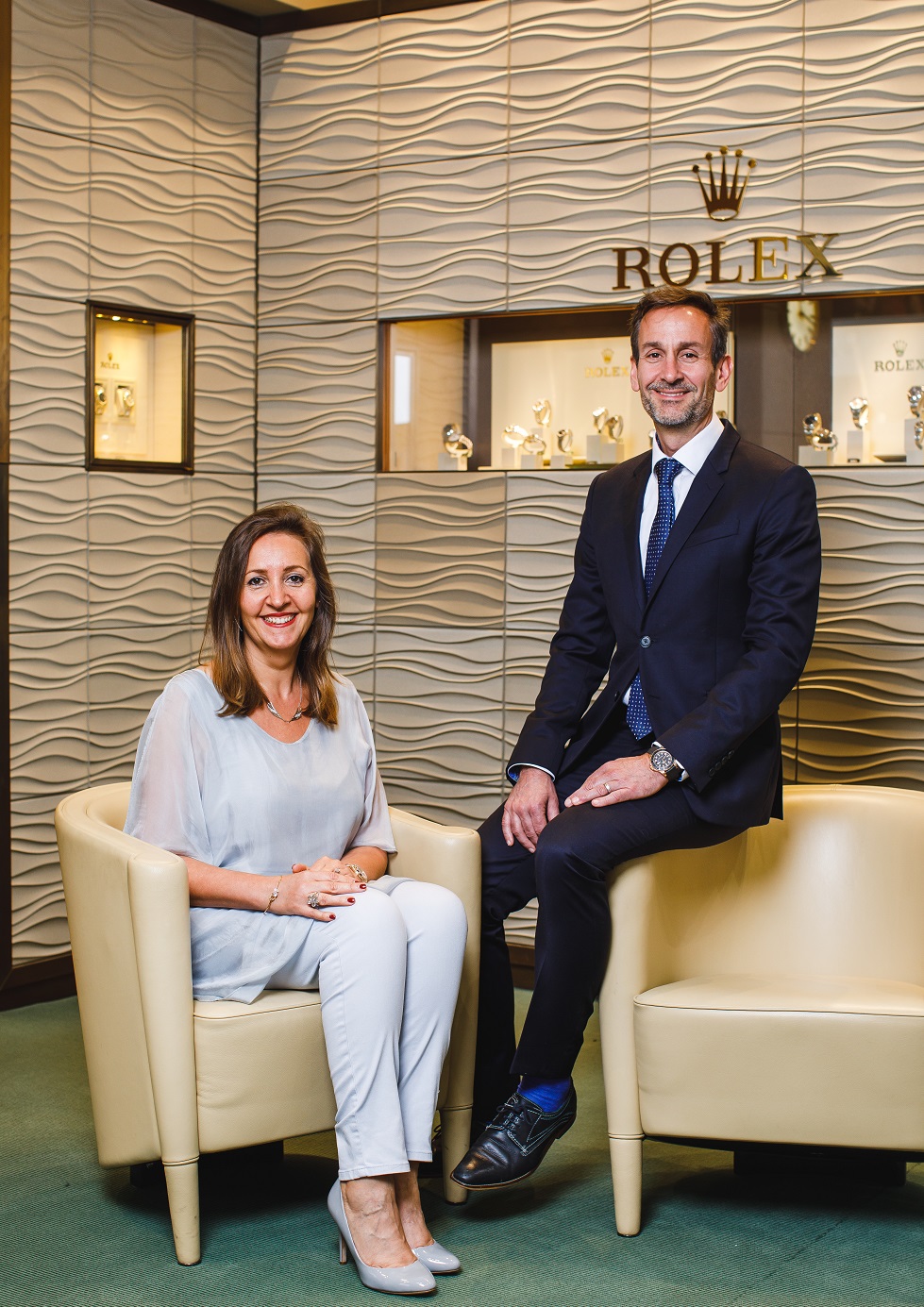 To mark the store’s 100th anniversary, Melanie and Dominic celebrated with a vintage-themed, centenary afternoon tea. The pair invited 800 guests to join their huge street party which stretched along West Street. The tea party, jazz music and entertainment, were accompanied with glorious sunshine making the celebration the perfect day to remember. 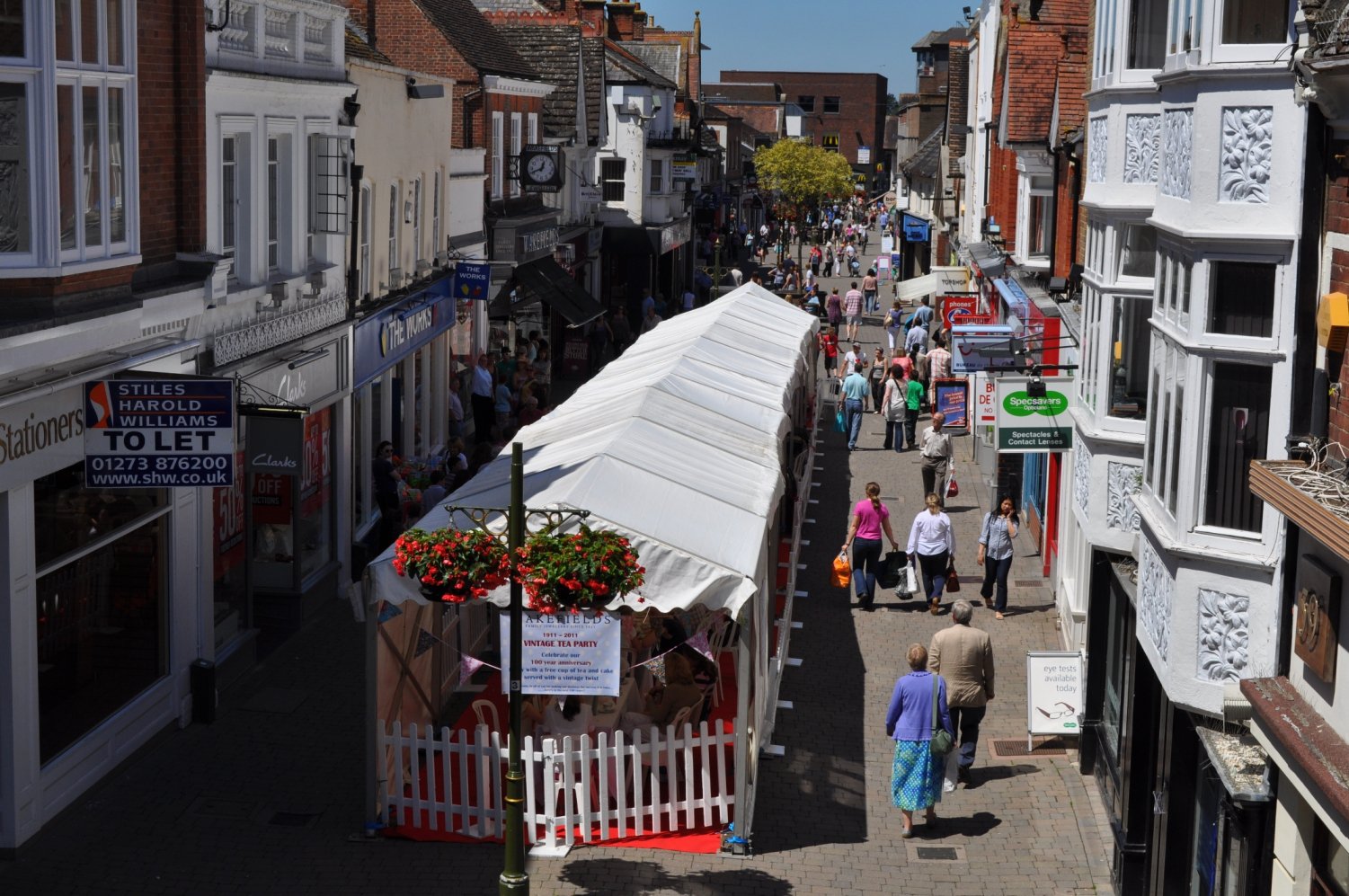 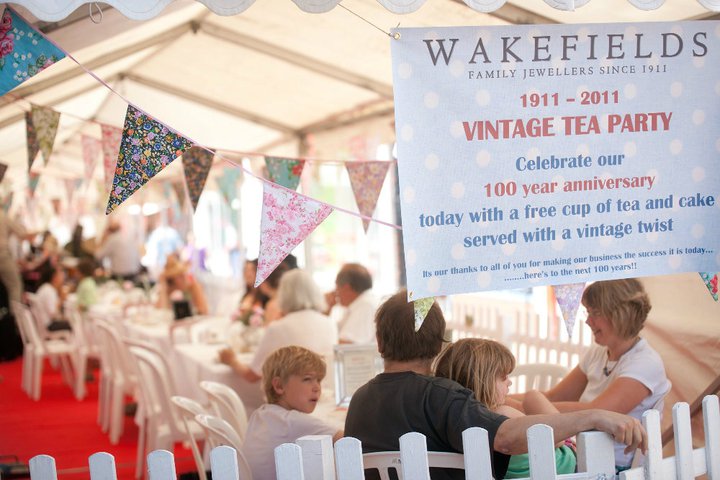 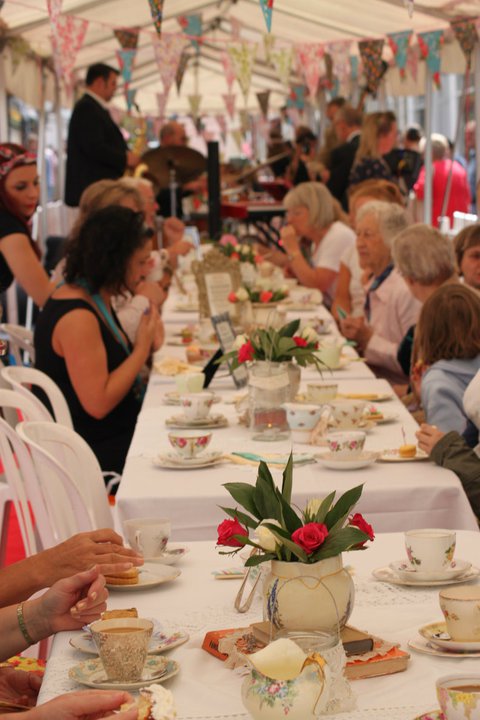 Wakefields Jewellers proudly joined the prestigious, global network of Official Rolex Retailers, allowed to sell and maintain authentic Rolex watches. To this day our highly-skilled and trained Rolex team are dedicated to providing exceptional service and look forward to using their knowledge and expertise to guide you through our selection of Rolex watches. 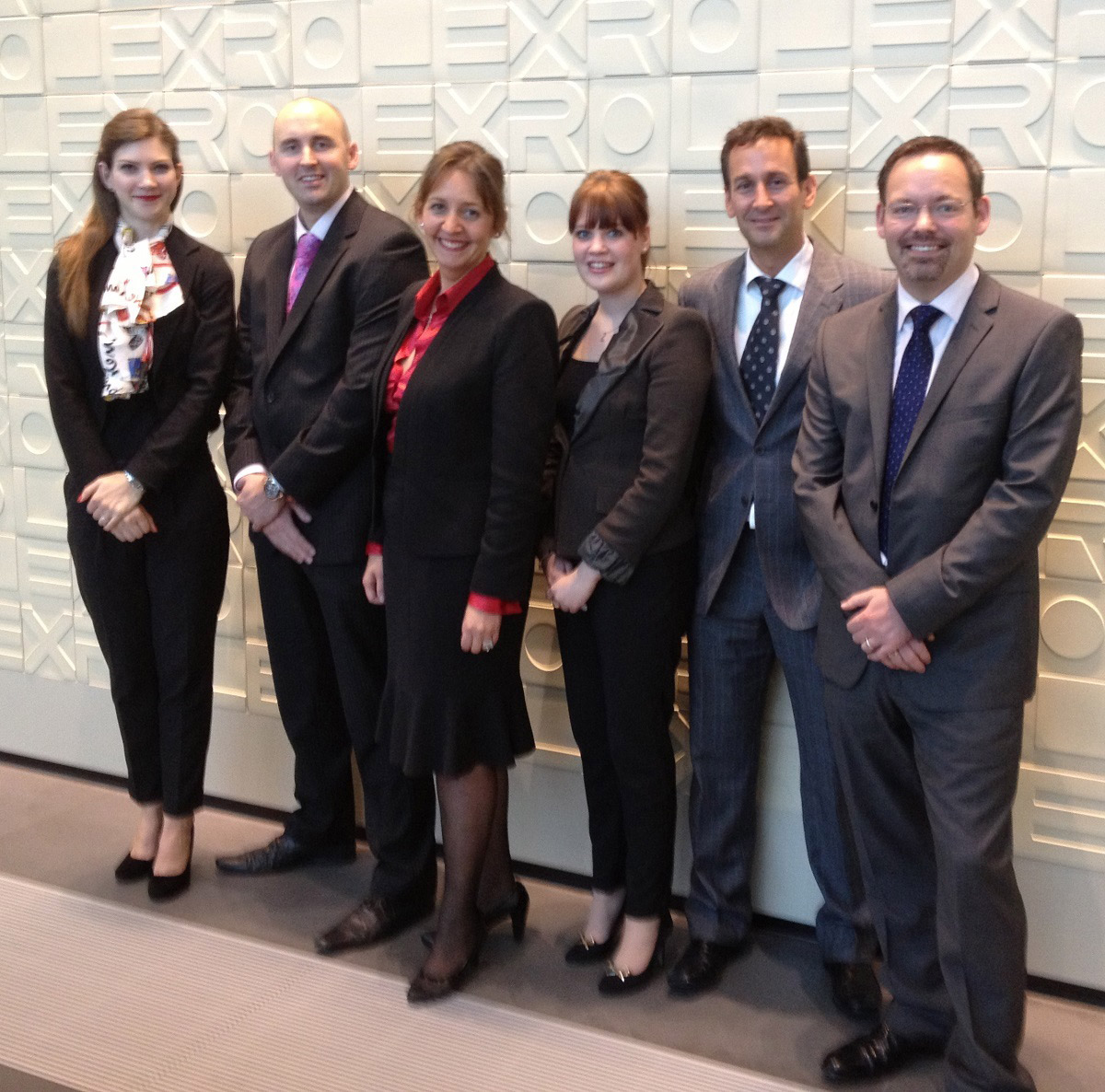 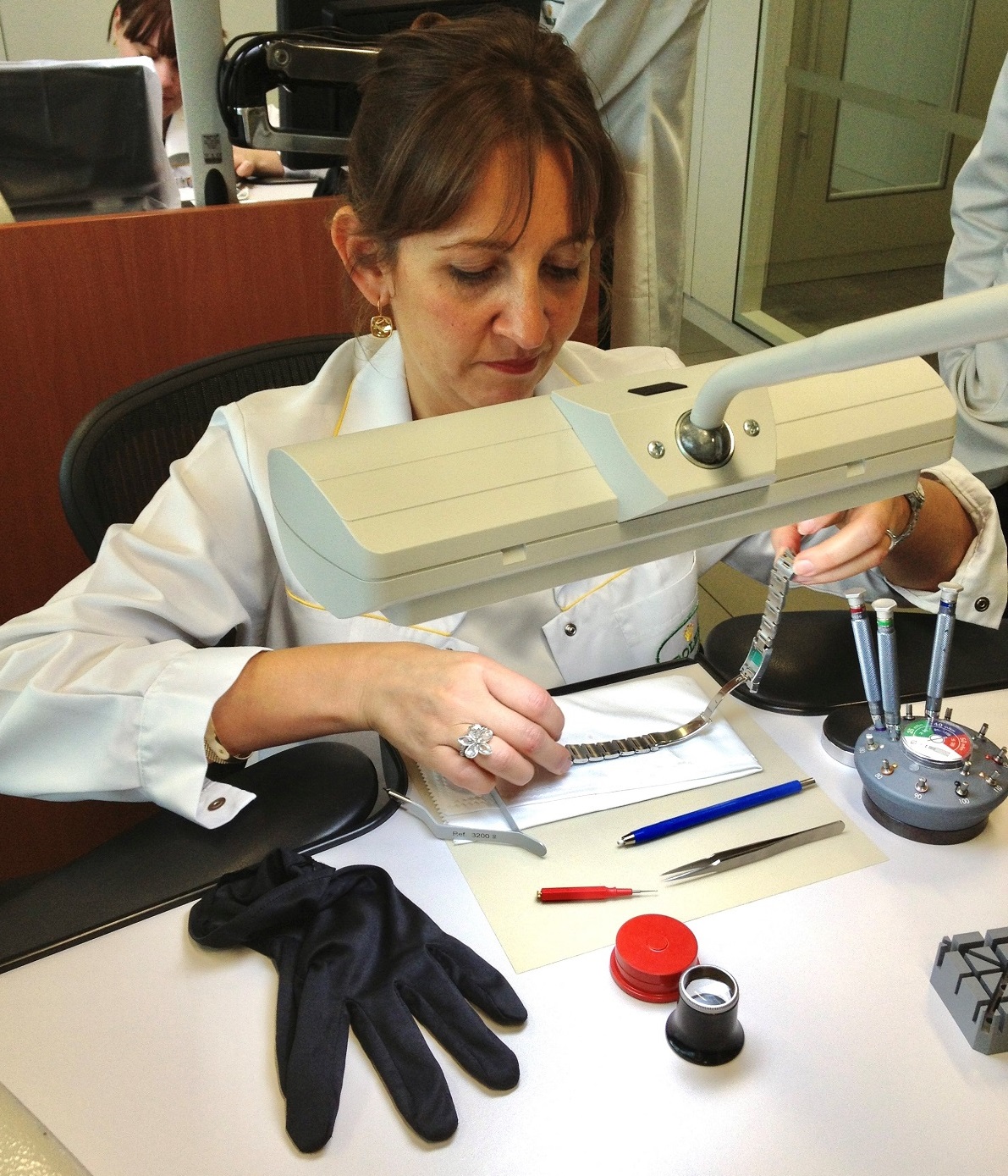 This is a photo of Melanie Wakefield at Rolex training
2019

The on-site workshop at Wakefields was expanded to cater to the increased demands for bespoke fine jewellery design and repairs. The additional space generated the opportunity to create even more jewellery in-house than ever before, further utilizing the skillsets of the talented goldsmiths at Wakefields. Their traditional craftsmanship going hand in hand with access to new high-tech machinery, allowing their process to be even more intricate and specific. 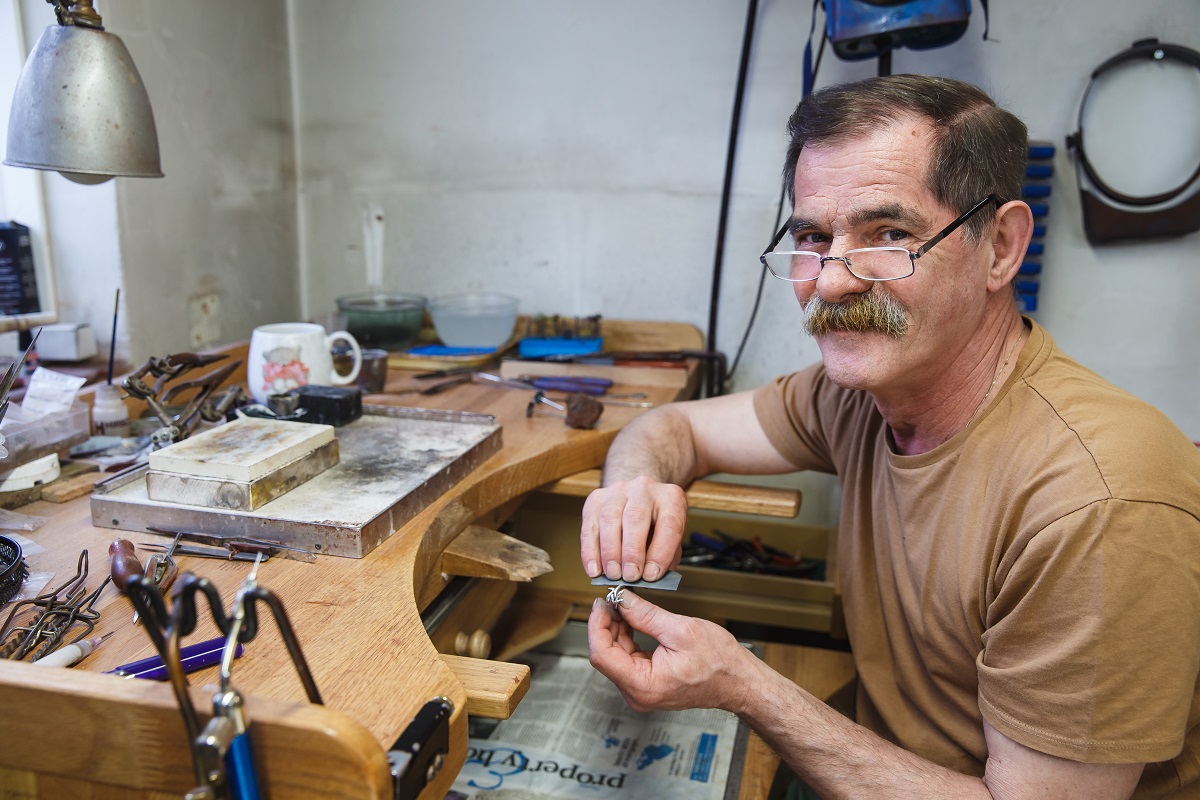 A photo of one of our goldsmiths, Wlodek at his workshop bench 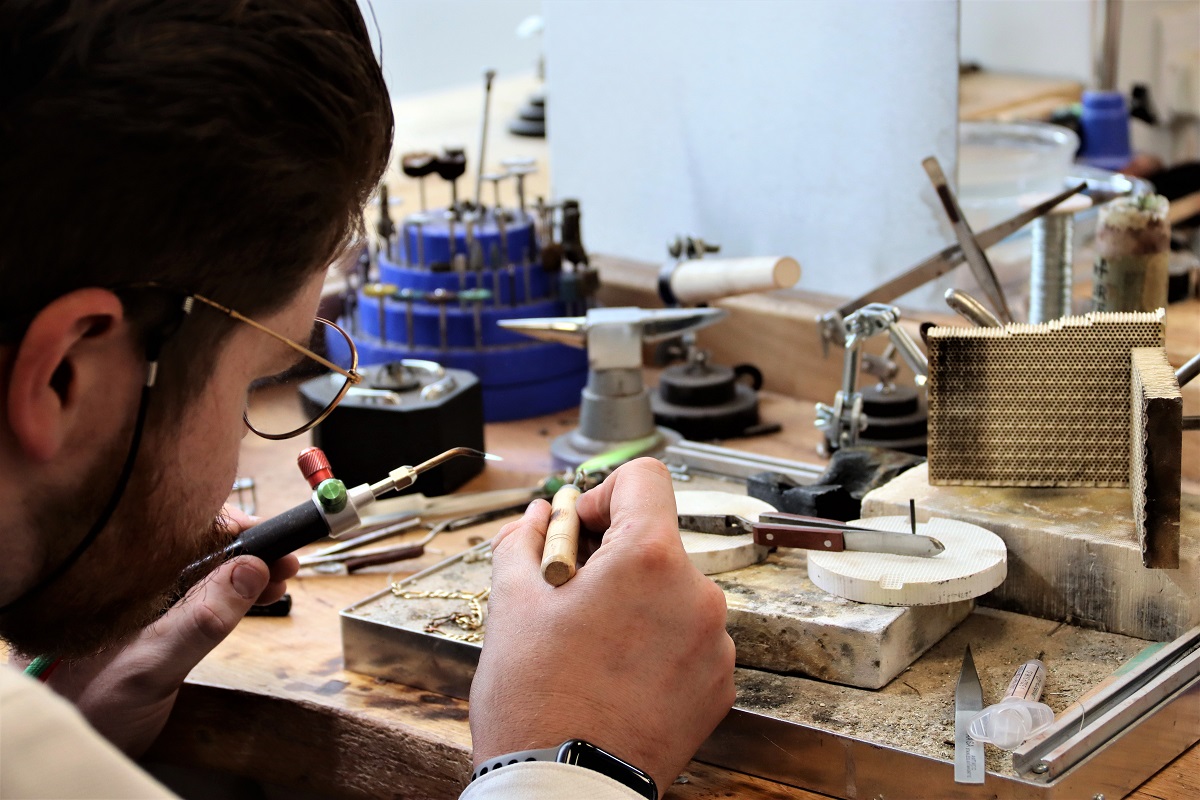 This is a photo of our other talented goldsmith, Joey, who works alongside Wlodek in our workshop.
2021

Fast forward to 2021, following a short closure at the beginning of the year we announced the reopening of our store in May, showcasing a luxury new retail environment. Having such an impressive history behind the business and considered a much-loved feature of the town, it was important to us that we respected our extensive heritage. The overall design of our interior has been massively inspired by Art Deco; an art style that was incredibly popular during the time Wakefields first moved into 11 West Street in the 1930’s. Every detail combines contemporary design with classic styling of the era, from the elegant bronze work to the terrazzo flooring that welcomes you in our foyer. We hope our luxury new showroom will allow us to continue to provide our customers with a unique retail experience and further elevate our services for years to come. 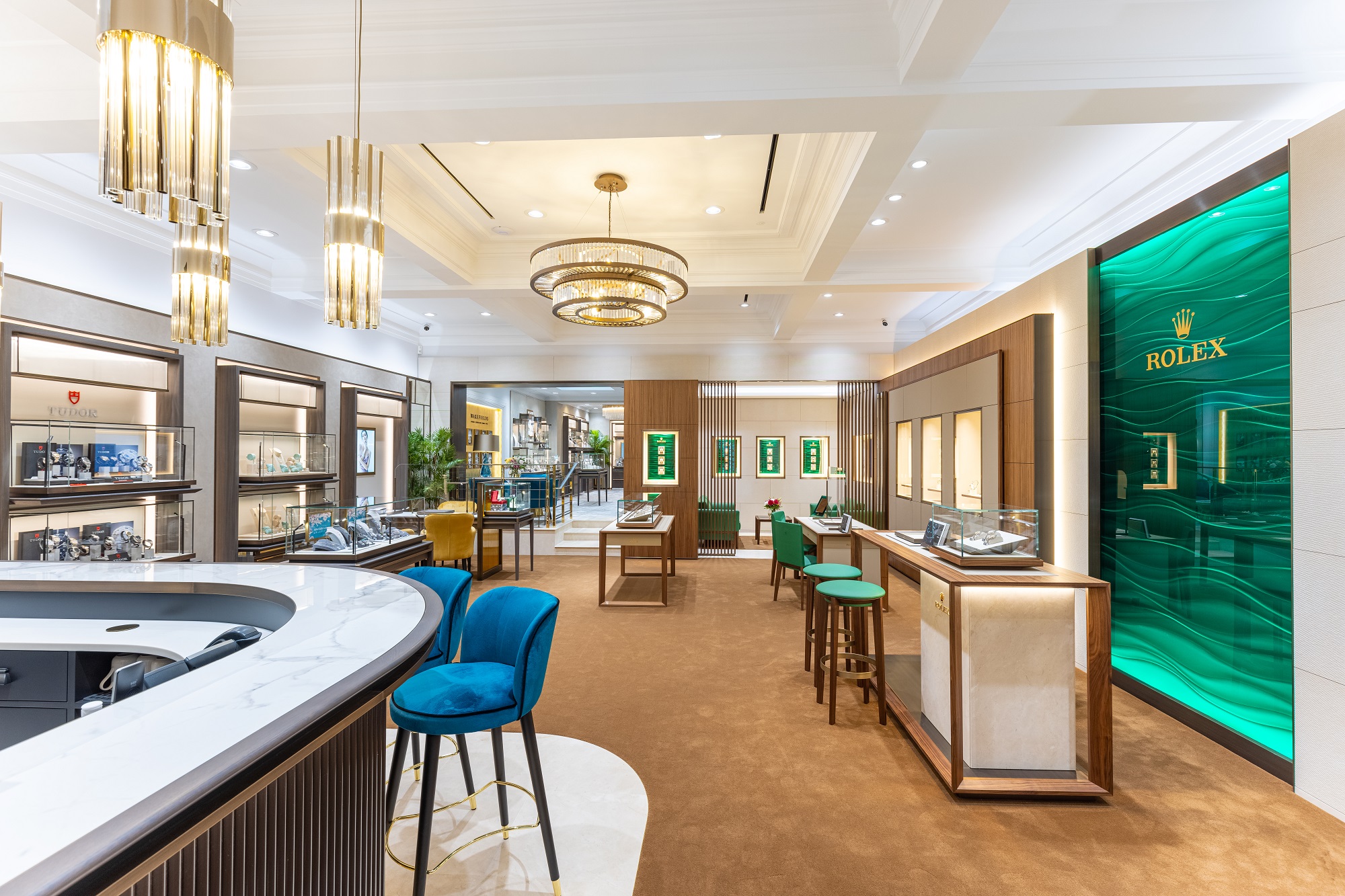 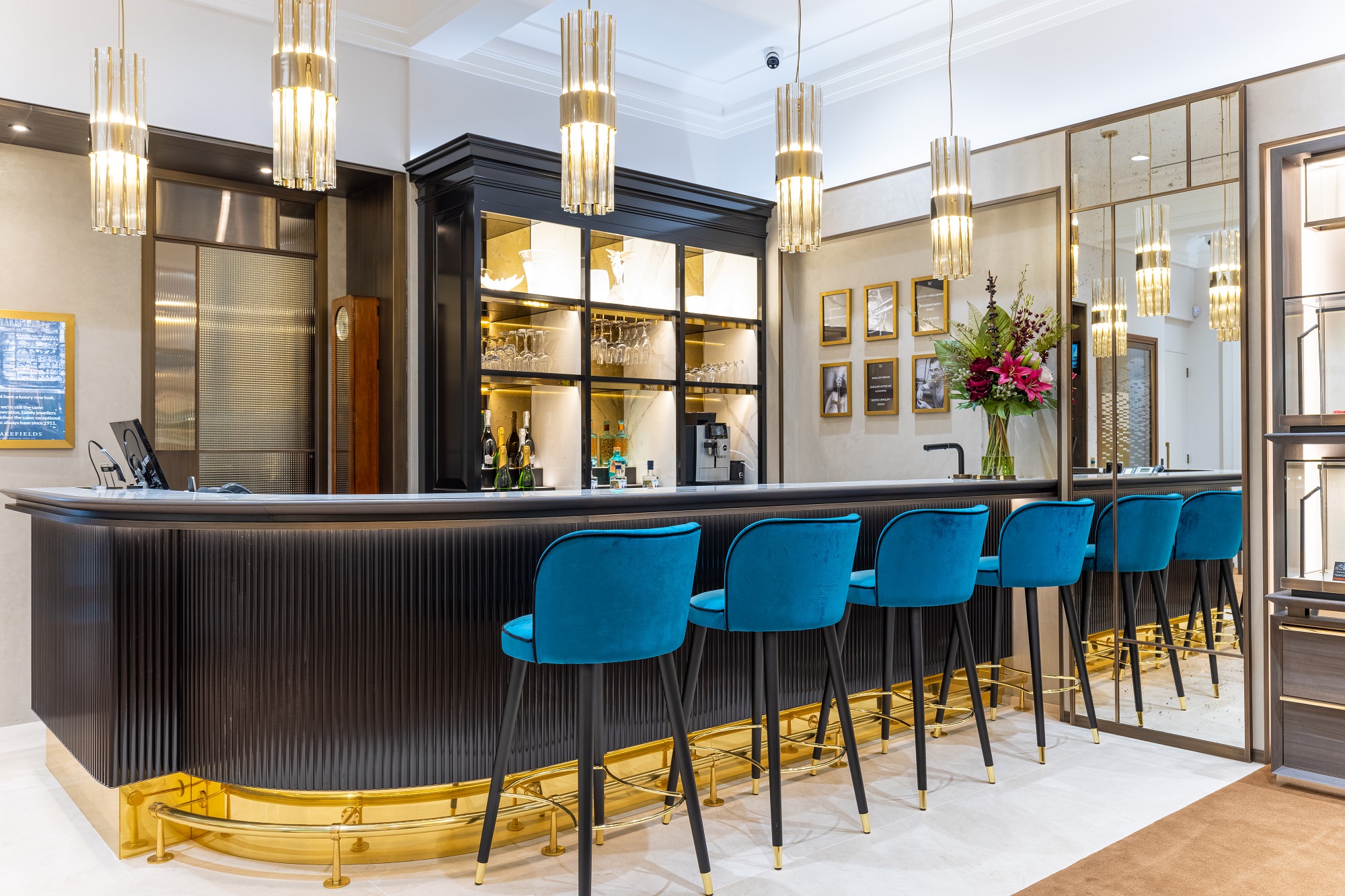 The original 1930s Boots the Chemist cabinet has been repurposed for display. Plus the original Wakefields clock is still a focal feature. 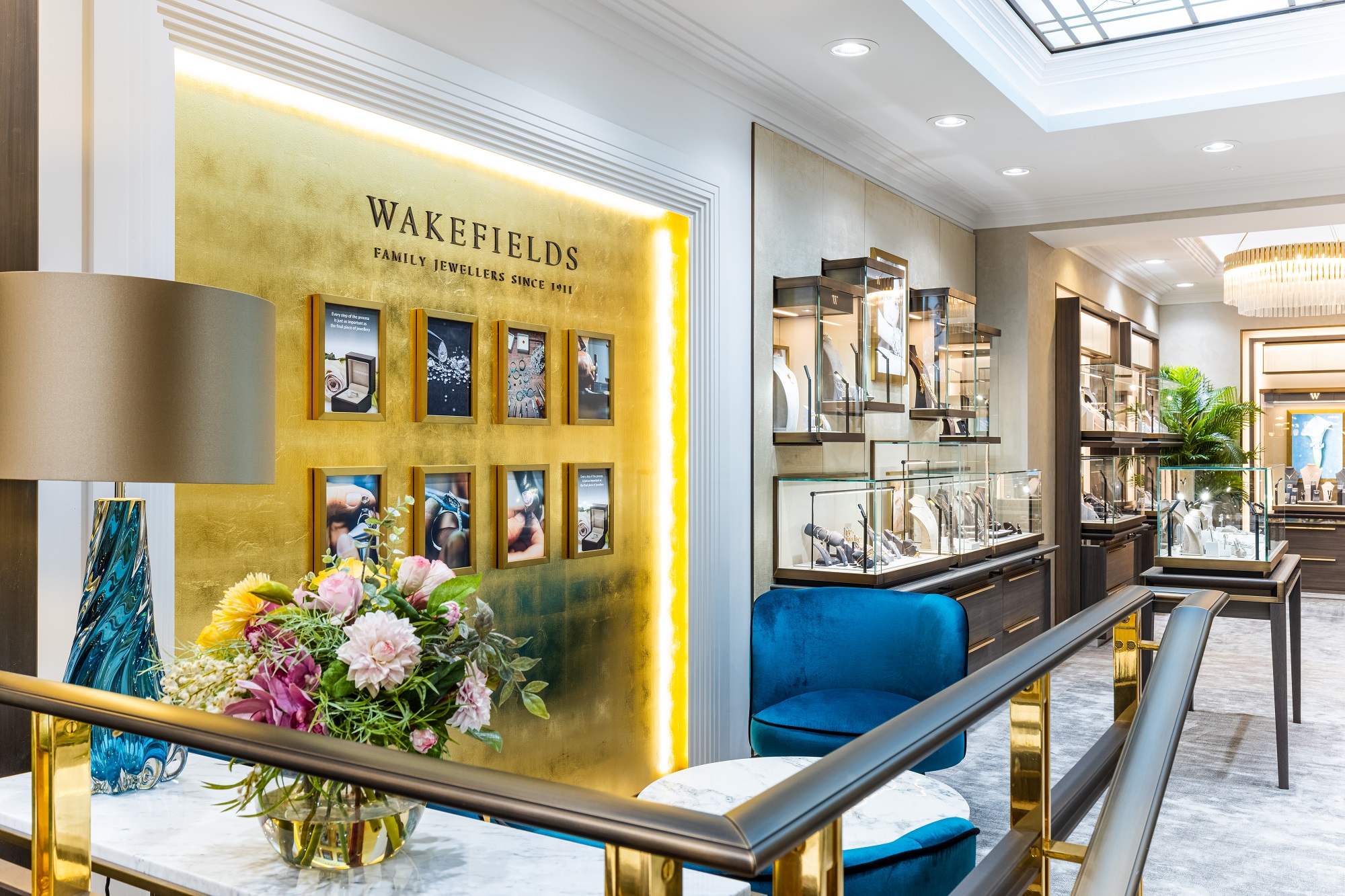