Each year as a way to say thank you for the continued support of the brand, Rolex allocate tickets to exclusive events and encourage their official retailers to invite a selection of their Rolex customers to indulge in a day of luxury.

This year, Wakefields Jewellers was lucky enough to receive tickets to the highly anticipated Goodwood Revival, as Rolex have been title sponsors of the Drivers’ Club since 2004. Melanie Wakefield and her partner Willie Hamilton attended the event, hosting selected Rolex customers for a fun-filled day of nostalgia. WHAT IS THE GOODWOOD REVIVAL?

Hosted every September since 1998, the Revival recreates the golden era of Goodwood Motor Circuit, between 1948 and 1966. The extraordinary event, a theatrical and sporting drama, assembles the most significant racing cars and motorcycles along with legendary drivers and riders from the past and stars of today. Everyone who attends the Revival dresses in the vintage style of the time, making the event a fully-immersive, journey back through the decades. It was the present Duke’s grandfather, the ninth Duke of Richmond, known as Freddie March, who brought motor racing to Goodwood. A renowned amateur racer himself, after the Second World War he created a circuit from the road that ran around the perimeter of the airfield. On its opening in September 1948, Freddie March sped around the circuit in a Bristol 400 to the delight of the 15,000 spectators who had come to see Britain’s first professionally organised post-war racing event. Over the next 18 years the circuit became one of the most popular in the world. The revival began 50 years later, in September 1998, when the Duke of Richmond drove around the circuit in the same Bristol 400 in which his grandfather had opened the track. 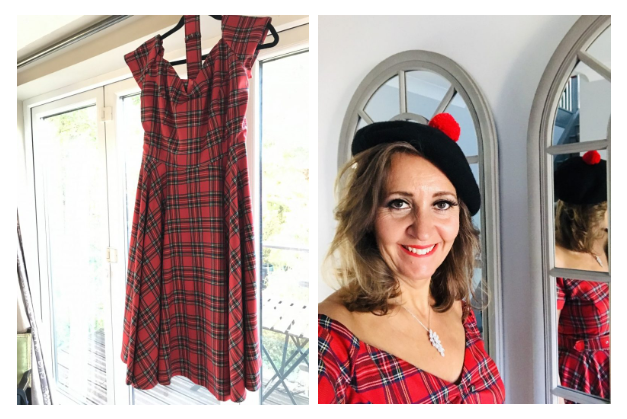 Finding the perfect outfit for the Goodwood Revival is an important part of the event. Each year the bar is raised by the increasingly authentic vintage ensembles, which are integral in creating the immersive experience. 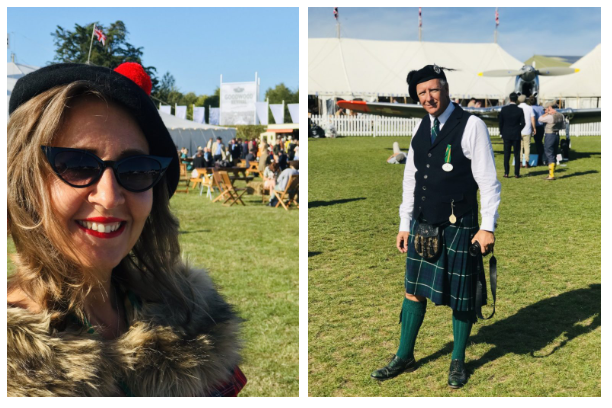 This year, Melanie donned a 50’s-inspired rockabilly dress in a vibrant red tartan fabric, with a matching pom-pom beret. Paired with Willie’s traditional Scottish attire, the pair perfectly celebrated his Scottish heritage whilst remaining authentic to the era in time. Of course no outfit of Melanie’s would be complete without the addition of jewellery embellishments. Melanie’s watch of choice was of course a Rolex, which she teamed with a matching gold FOPE bracelet – one of the newest brands to be offered in store at Wakefields Jewellers. On her other wrist she wore a classic diamond tennis bracelet, stacked with a ruby and diamond cluster bracelet, perfectly accentuating her red themed ensemble. 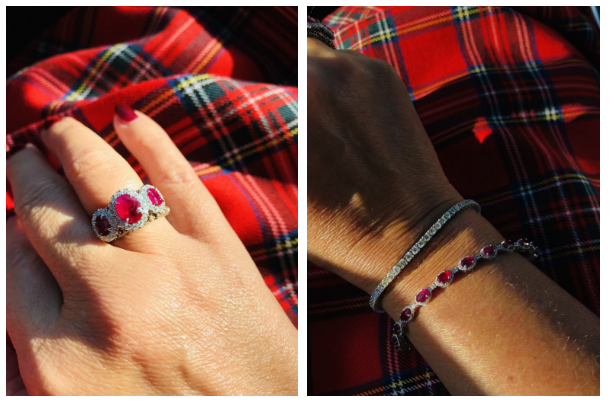 Finally to complete the look she added a stunning ruby and diamond three stone cluster ring, the colour of which positively glowed in the glorious sunshine.

ARRIVING AT THE GOODWOOD REVIVAL

Completely uncharacteristic of British events, there wasn’t a cloud to be seen in the sky the day of the Revival. The beautiful weather only added to the buzz on the day, and from the moment the group arrived, they were officially transported back through time. Every intricate detail had been considered in the creation of the event, so that nothing could detract from the feeling that you were no longer in 2019.

A variety of buildings designed to look like vintage businesses like garages, hairdressers and diners, created the perfect setting for the day. Whilst the extensive paddocks showcasing old-fashioned vehicles and aircraft provided the perfect props for fun photo opportunities – of which there were many! 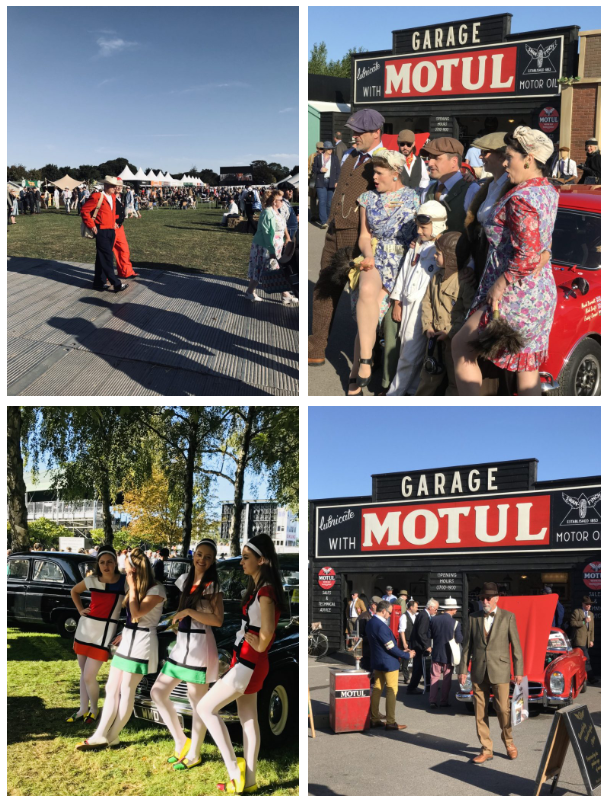 The motor car and bike races at the very heart of the event ran throughout the entirety of the day, reaching great speeds around the infamous track. The roar of engines and babble of sporting commentators filled the air, along with the smells of petrol and engine oil. At every turn you could spot a mechanic, covered in grease and oil who had finished working on a vehicle and stopped to take a well-earned break. 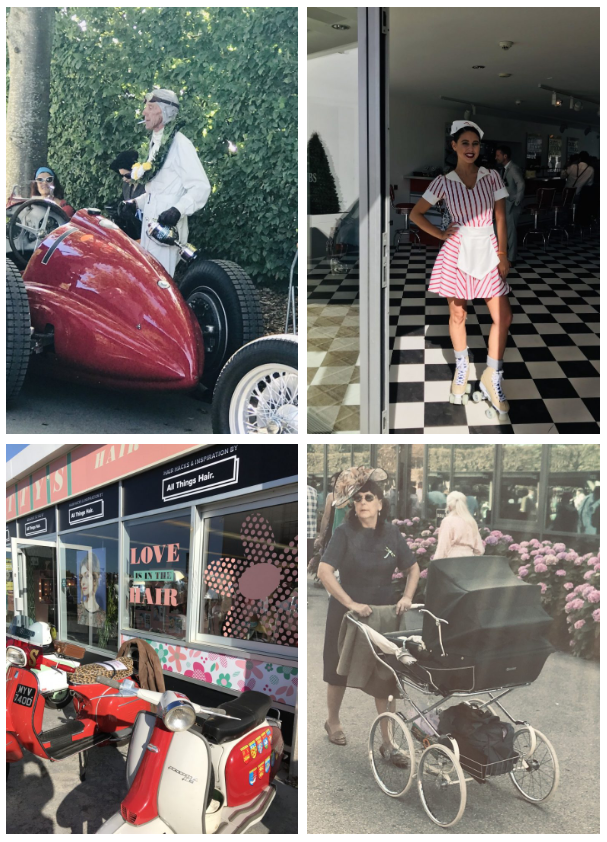 The Revival also provided the perfect occasion to pay respects to those who gave their lives on D-Day, with a major parade of Allied military vehicles from the Second World War, joined by parachutists, marking the 75th anniversary of the momentous day. 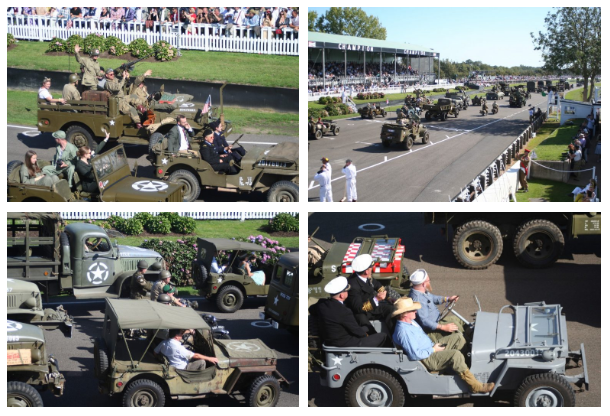 The incredible atmosphere that surrounded the event had to be experienced to be believed. Whilst most of the Revival is open for everyone to enjoy, entry to the Rolex Drivers’ Club is an invitation only experience. The exclusivity of this area makes it a tremendous privilege, which both Melanie and her guests were incredibly appreciative of. Positioned in close proximity to the Goodwood Aerodrome, guests of the Rolex Drivers’ Club were in perfect position to watch the helicopters and aeroplanes take-off and descend between their air displays – a real treat for aviation enthusiasts. Every year Rolex theme the entrance to the Drivers’ Club to create a new experience. This year they transported guests back to a vintage campsite, complete with actors taking part in traditional past-times making the experience all the more authentic. Children could be found frolicking with skipping ropes, ladies sat conversing over their knitting and even the odd washing line could be seen swaying in the breeze. The campsite was decorated with nostalgic signs and images to complete the aesthetic. We spotted a poster of pin-up icon and Britain’s answer to Marilyn Monroe, Diana Dors who actually purchased her engagement ring from Wakefields Jewellers back in the 1950s when Melanie Wakefield’s grandfather Jim Wakefield, owned the jewellers.

At first glance you would question whether you had stepped into the right area, with the stark contrast between the luxury of the Rolex Drivers’ Club and the organised chaos of the campsite, but that in itself was part of the charm. 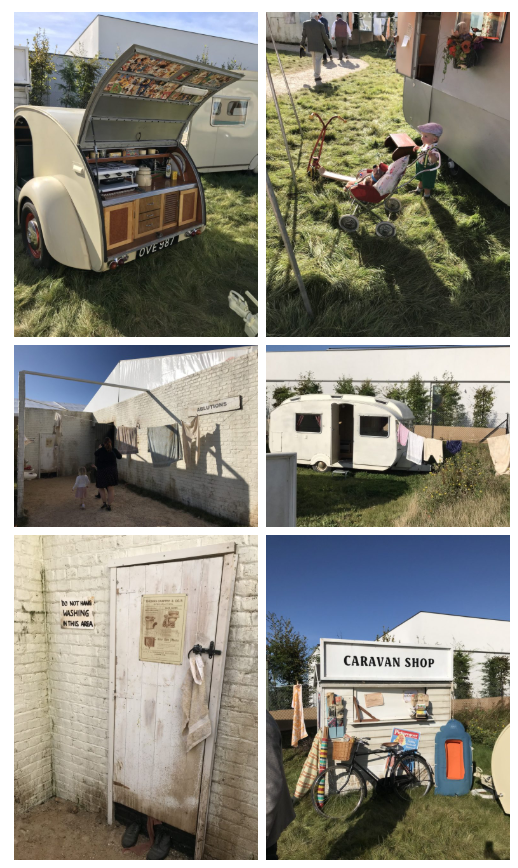 BRUSHING SHOULDERS WITH THE ICONS

Once inside the Driver’s Club the group were invited to dine with the other guests, including Sir Jackie Stewart, Rolex ambassador and Championship Formula 1 driver, and Lord March, British aristocrat and owner of Goodwood Estate, who both gave presentations on the day. 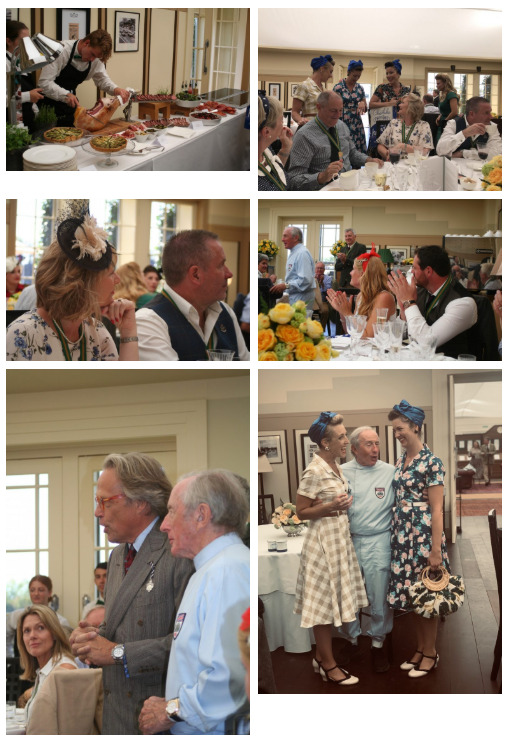 Sir Jackie Stewart, one of the very first Rolex ambassadors, spoke at length about how he had overcome the adversity of not only racing during a time when motor car racing was incredibly dangerous, but his own struggles with severe dyslexia. Interestingly to this day, Sir Jackie Stewart even still holds the record for the fastest lap at Goodwood. Lord March spoke of the enduring partnership between Rolex and Goodwood, highlighting how grateful he was for their continued support. Both were appreciative of how the sponsorship had kept the memory of traditional motor car racing alive, and owed much of their success to the brand.

A thoroughly enjoyable day was had by all, which left every single guest feeling very greatful for having had the opportunity to experience the Goodwood Revival with access to the exclusive Rolex Drivers’ Club. If you’ve read through this post and are interested in being invited to future events with us at Wakefields Jewellers, please get in touch with us to register your interest.

This week saw the launch of TUDOR’s new BASELWORLD 2017 timepieces, unveiling a range of five different models in ...
Read the story