IN 1970, TUDOR LAUNCHED ITS FIRST CHRONOGRAPH, THE OYSTERDATE. THIS ROBUST, FUNCTIONAL WATCH OFFERED A UNIQUE DESIGN, PAVING THE WAY FOR 50 YEARS OF TUDOR CHRONOGRAPHS. 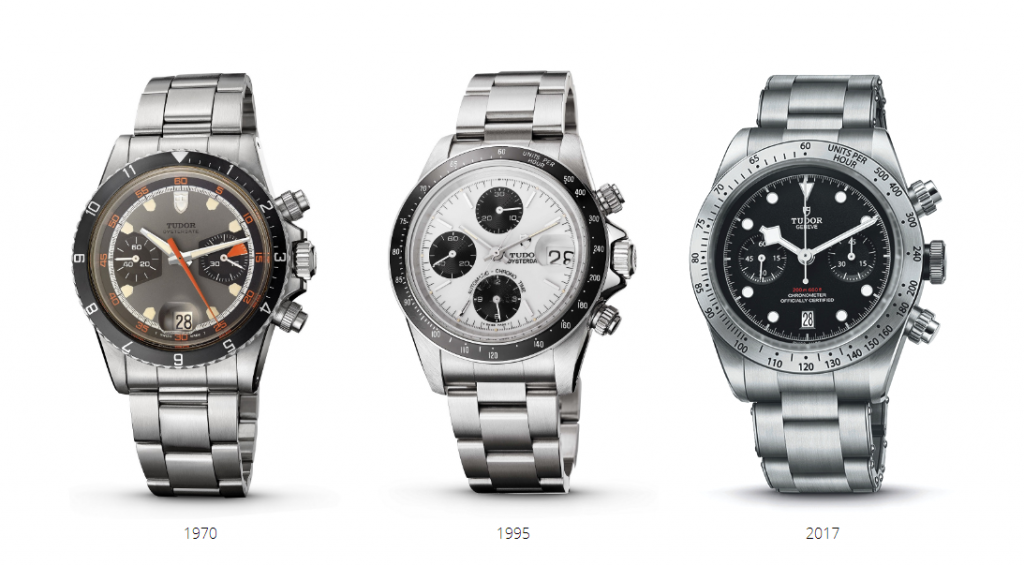 The first TUDOR chronograph was named the Oysterdate, and immediately became associated with mechanical sports watches. Powered by a robust mechanical Valjoux 7734 calibre with manual winding and cam chronograph mechanism, it was launched in 1970. Its case was generously proportioned and its design sharp and masculine. An unusual dial design.

There were three variations of this first sporty TUDOR chronograph, each distinguished by their bezel type. Reference 7031 featured a bezel topped by a Plexiglas disc with a 500-unit graduated tachymetric scale, used in particular to calculate average hourly speeds between two points. 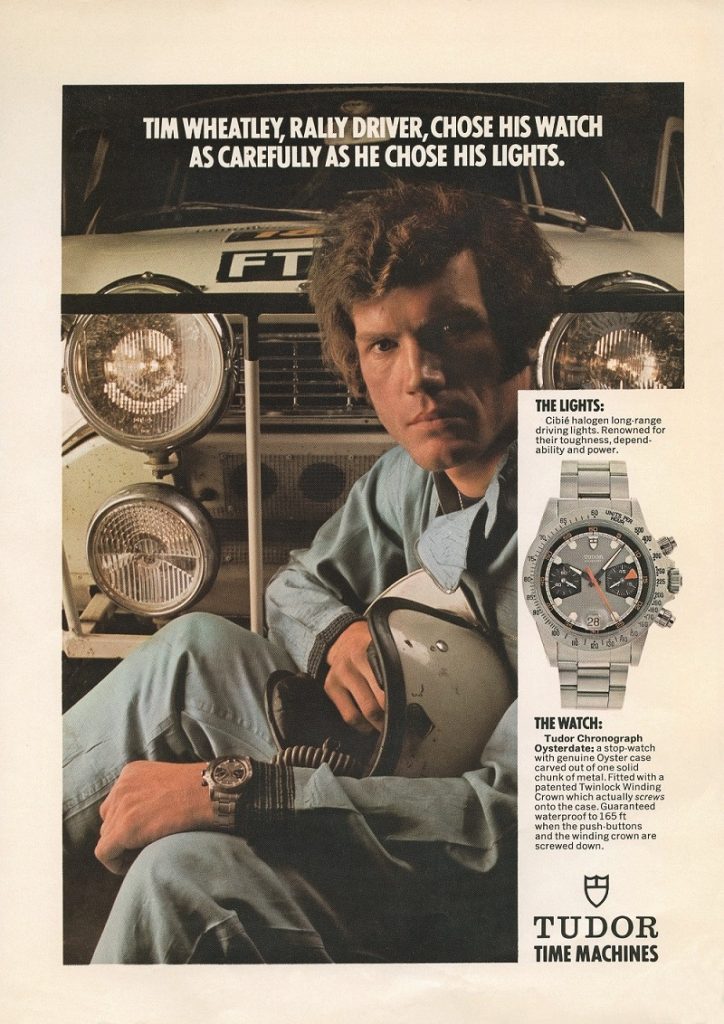 The advertising campaign for the first TUDOR chronograph, featuring a rally driver, highlighted the technical qualities and robustness of a TUDOR chronograph, as well as its professional vocation, far more than just a status symbol. 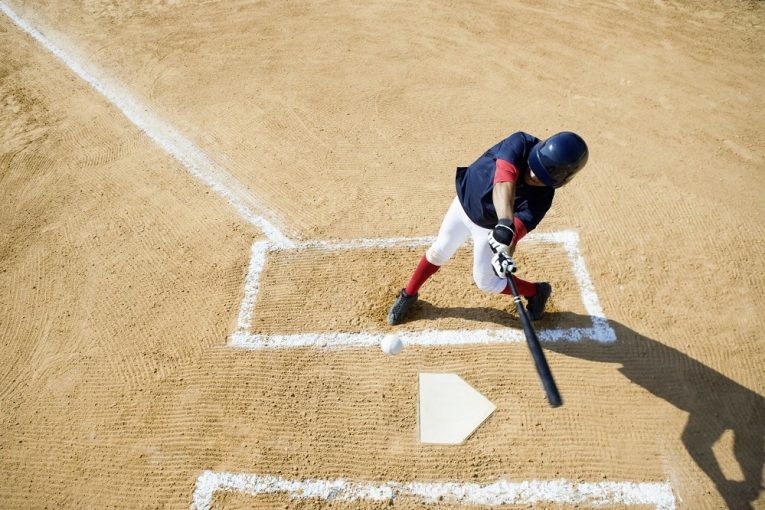 View of the 7000 series Oysterdate chronograph pentagonal hour marker and a baseball field home plate, from which the model took its nickname.

The dials on these first three references came in two variations, grey and black. They also featured unusual painted luminous hour markers in a pentagonal shape, earning them the nickname “Homeplate” in reference to the home plate on a baseball field. Finally, the chronograph’s minute counter has 45-minute graduations, a rarer version than the more common 30-minute variant. 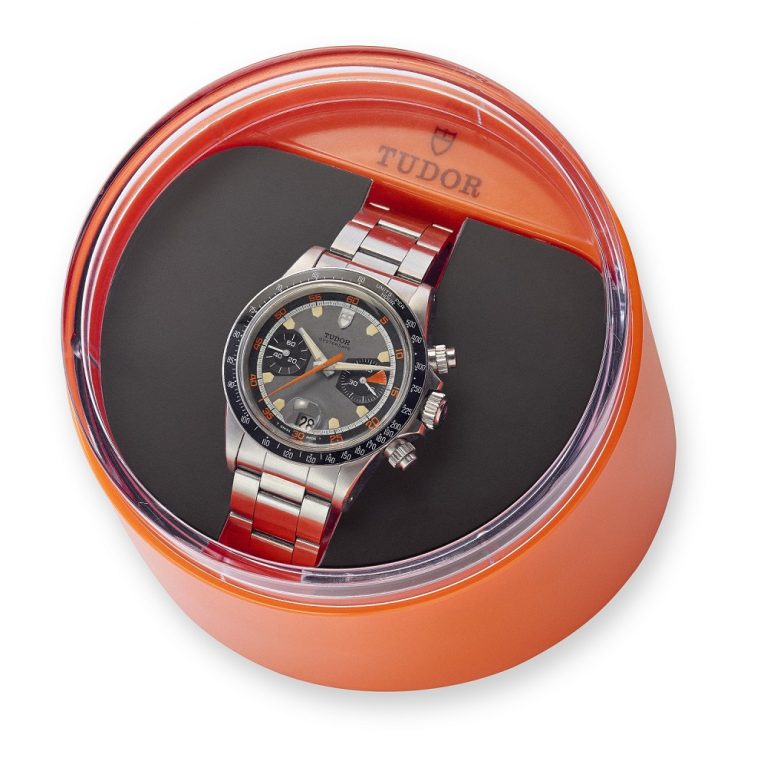 In keeping with the spirit of the era, the 7000 series models came in a unique bright orange cylindrical presentation case.

The second generation of TUDOR chronographs was launched in 1971 and featured in the brand’s catalogue until 1977. Dubbed the TUDOR “Monte-Carlo” among enthusiasts thanks to their roulette wheel-style dials, the 7100 series chronographs retained the same case as their predecessors as well as the spirit of their dial, but the movement changed.

Instead of the Valjoux 7734 calibre, the latest TUDOR chronographs were now equipped with the manually wound Valjoux 234. This new movement offered a more sophisticated chronograph mechanism, with clutch and column wheel. 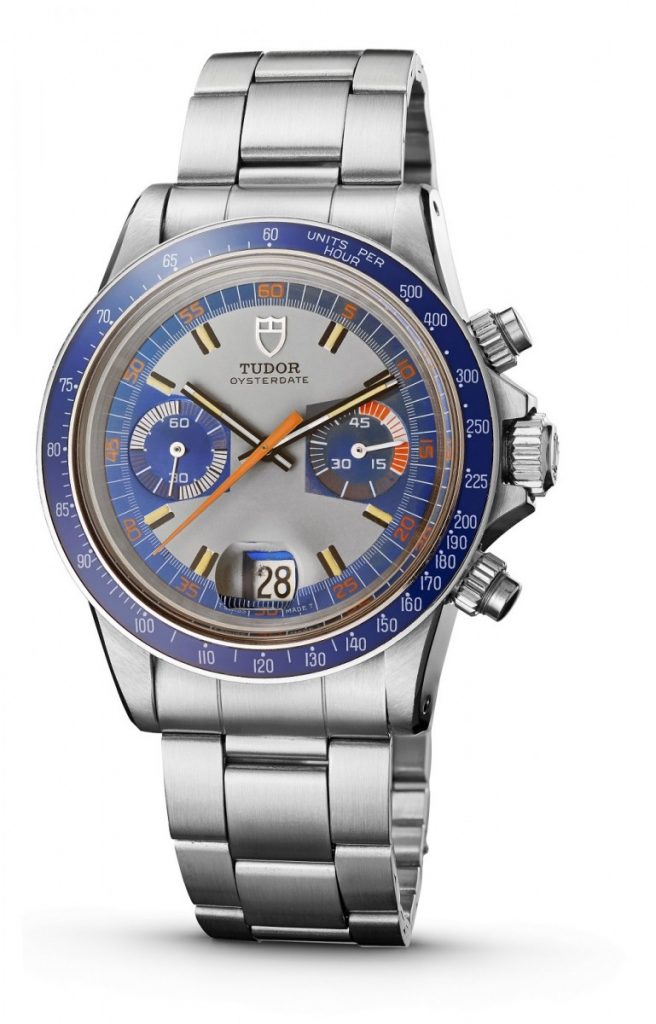 A new colour combination was introduced in this series, TUDOR’ssignature blue, with a blue and grey dial and two types of matching blue bezel. This new series consisted of three chronographs. Reference 7149/0, with its Plexiglas bezel and tachymetric scale graduated up to 500 units per hour, replaced reference 7031/0 in the catalogue. Reference 7159/0, with its satin brushed steel bezel and engraved tachymetric scale, replaced reference 7032/0; while reference 7169/0 became the now mass-produced incarnation of the 7033/0 prototype with rotating bezel.

In 1976, TUDOR presented a new product family that represented a small revolution for the brand. These new Prince Oysterdate watches were the first TUDOR chronographs to be equipped with self-winding movements. While the case retained the general lines of the previous families, it was made thicker to accommodate the rotor of the self-winding movement, earning it the nickname “Big Block” in collectors’ circles. The name “Big Block” endured when the following 79100 series was introduced in 1989, which underwent only minimal modifications. 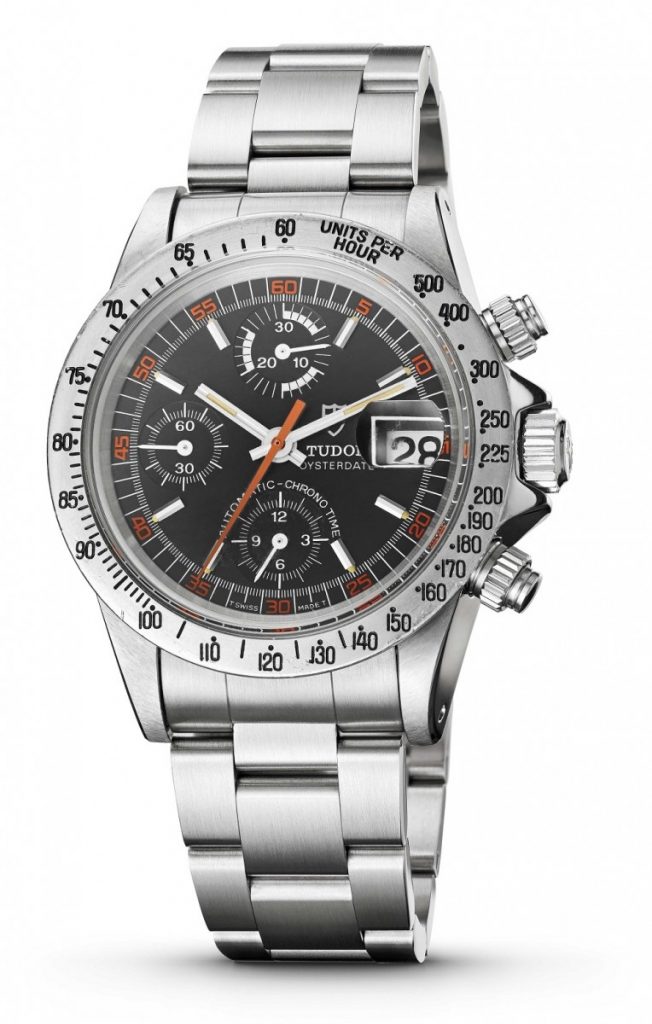 The self-winding reference 9430 with a dial inspiredby the unique aesthetics of the first generations ofTUDOR chronographs.

Like the previous generations, the 9400 series consisted of three references, each distinguished by their bezel type, a feature also present in the “Big Blocks” of the 79100 series. Similarly, several dial variations were available. These featured two aesthetic trends, one freely inspired by the spirit of the dials of the two previous series, the other highlighting the strong contrast between dial and counter with black and white or silver and white combinations. The movement behind these new chronographs was the Valjoux calibre 7750. The same diameter as the manually wound Valjoux 234, it was 1.5 mm thicker than the latter, and had a cam system chronograph mechanism. The architecture of this new movement required a reorganisation of the dial with the addition of an hour counter, with the counter group shifting left and the date aperture to 3 o’clock. 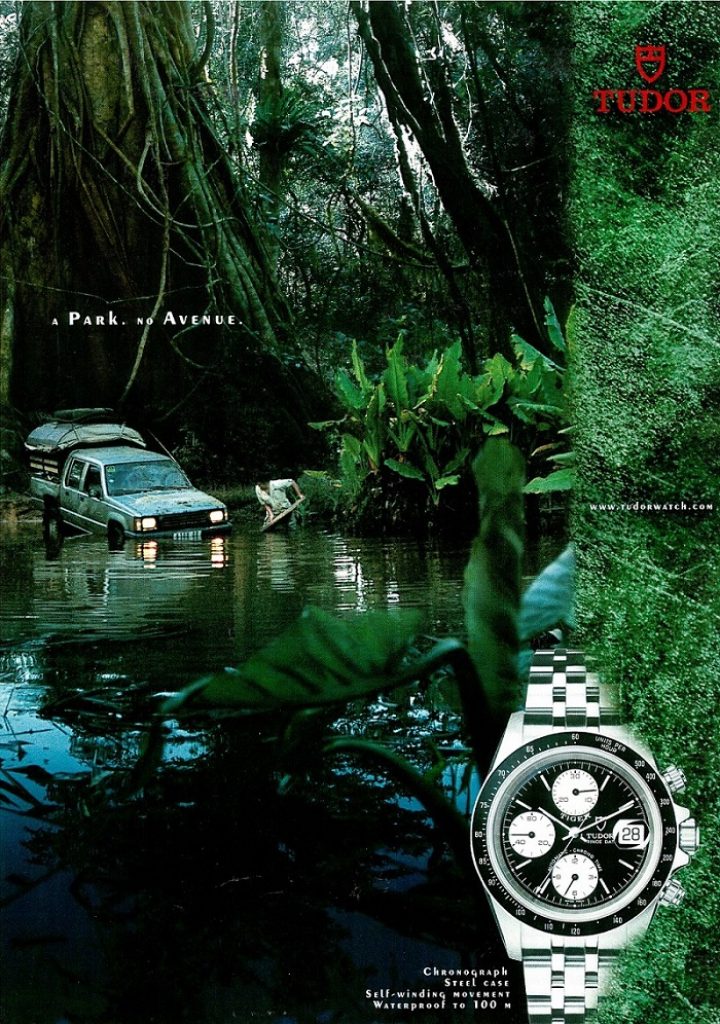 In 1995, with the introduction of the 79200 series of references, the aesthetics of the Prince Oysterdate chronograph were subtly yet significantly updated. Firstly, the case, which over the previous three generations of chronographs had essentially retained its famous imposing, sharp presence, became more refined and rounded. Keeping its highly recognisable silhouette, it now presented softer lines composed of curves and rounded configurations. 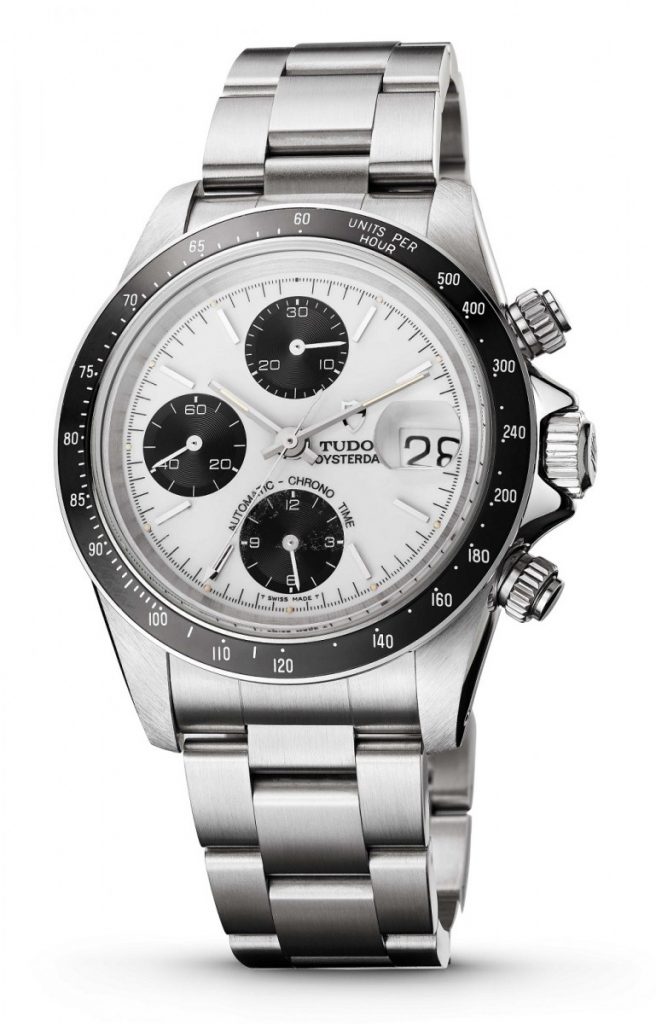 Several notable developments marked the design of this fourth generation over the next few years, including the introduction of a sapphire crystal – hence its nickname among collectors – as well as gold and steel configurations, and a leather strap. Its movement remained the Valjoux calibre 7750 in a substantially improved version, particularly from an aesthetic point of view.

In 2010, to mark the 40th anniversary of the first TUDOR chronograph, the brand launched the Heritage Chrono. This watch featured a modern design, while adopting the main aesthetic elements of the famous reference 7033 (a prototype from 1970 with hourly graduated rotating bezel), blending them with numerous subtle, unique details such as the bevelled, polished angles of the horns, the polished protective shoulder of the winding crown, and the knurling on the rotating bezel and pushers. 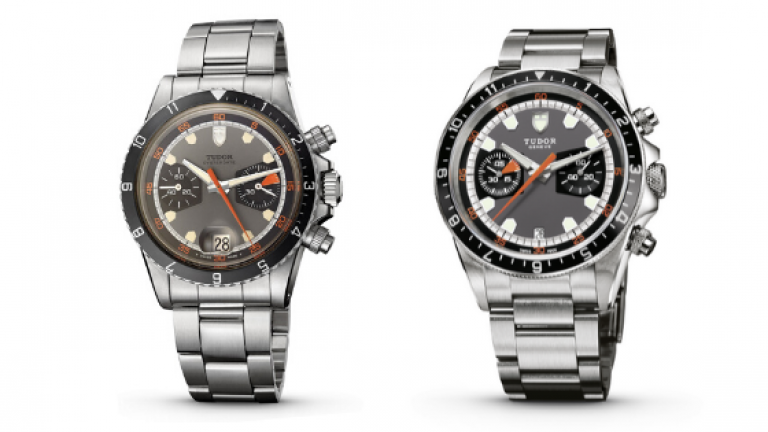 Two different dials, inspired by the options available in 1970, were offered with this new model: grey with black sub counters or black with grey sub-counters. While the pentagonal hour markers or “Homeplates” were originally painted, the 2010 version had affixed hour markers in the same shape, a refined touch that created increased depth in the dial display. As an additional detail, TUDOR offered a black, grey or orange Jacquard fabric strap with this model, a first for the time, which went on to inspire the industry as a whole. A steel bracelet was also available. 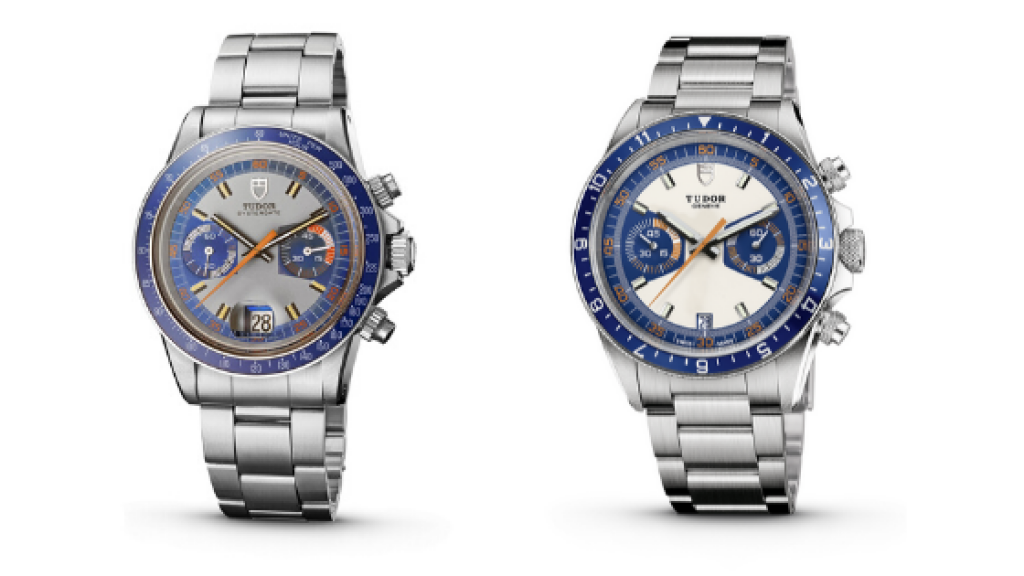 In 2013, a new version of this model was launched with a blue-accented dial, the Heritage Chrono Blue. In addition to its colour, this new model also featured a dial inspired by the second generation of TUDOR chronographs launched in 1971 dubbed the “Monte Carlo”.

The movement behind these models was a calibre 2892 with additional chronograph mechanism, adopting the principle of the minute counter with 45-minute graduations and the date at 6 o’clock.

In 2013, TUDOR surprised the watchmaking world with the launch of the Fastrider Black Shield, a resolutely sporty matt black chronograph that broke away from the brand’s traditional aesthetics. Its Monobloc high-tech ceramic case reflected its technological prowess and performance. Angular and detailed, it resembled the fairing of a Superbike. Its production process involved high-temperature injection and was the result of high-level technical expertise, boasting a unique performance for a watch in this price bracket. 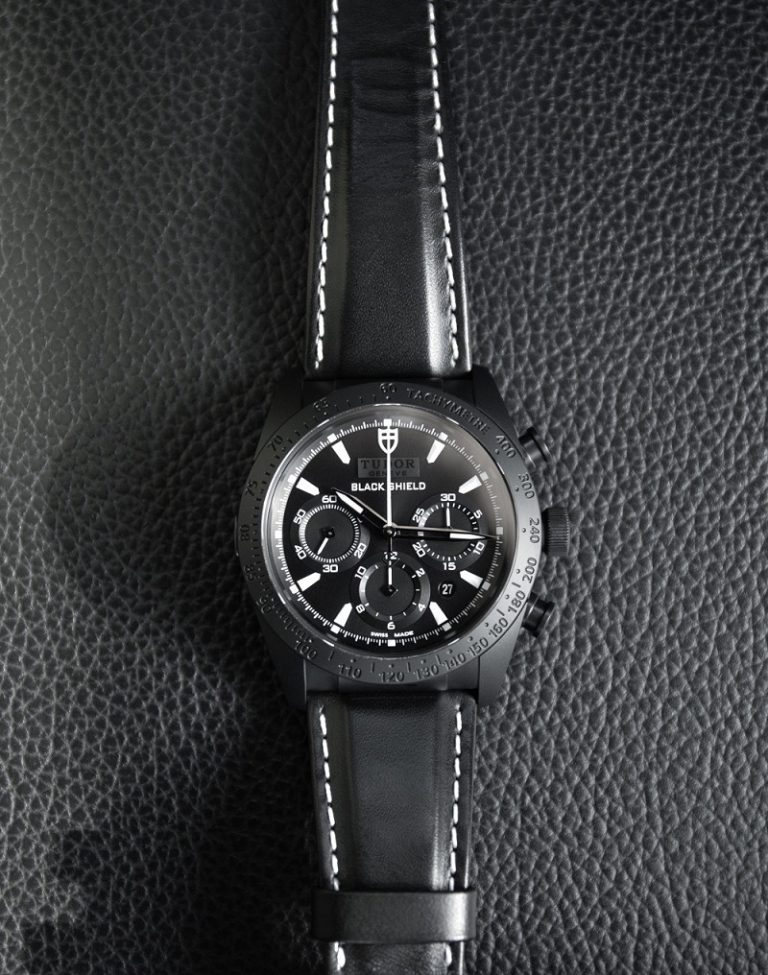 Initially offered in a black configuration with red hour markers or black with bronze-coloured hour markers, the Fastrider Black Shield was also made available in a high-contrast format, black with white hour markers. Its self-winding mechanical movement was the calibre 7753 with cam chronograph system and the date at 4.30. The calendar function boasted a rapid date corrector at 9 o’clock. The new model’s strap came in either matt black leather with white topstitching or black rubber.

Since the presentation of its first chronograph, the Oysterdate, in 1970, TUDOR has continued to produce watches that are closely tied to the world of motorsports. In the same way, since 1954 TUDOR has been constantly improving its professional divers’ watches. In 2017, the Black Bay Chrono boldly combined the aquatic heritage of the Black Bay family with the chronograph’s timekeeping function that ruled the racetrack. The result was the Black Bay Chrono, a chronograph with superior performance and a unique design. The year it launched, it won the prize for best watch under 8,000 Swiss francs at the Grand Prix d’Horlogerie de Genève. 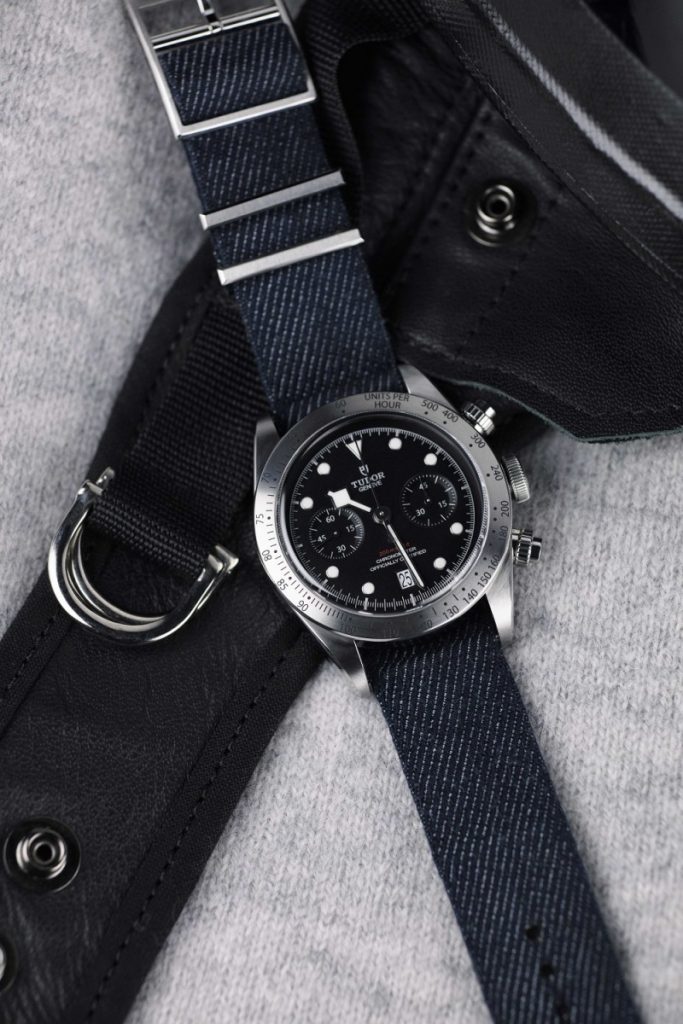 Boasting a 70-hour power reserve and silicon balance spring, and officially certified by the Swiss Official Chronometer Testing Institute, the Manufacture calibre chronograph MT5813 behind the Heritage Black Bay Chrono was a high-performance movement, designed in the purest watchmaking tradition, with column wheel mechanism and vertical clutch. In keeping with the TUDOR philosophy of quality, it presented extraordinary robustness and reliability, guaranteed by an array of extreme tests applied to all TUDOR products. Derived from the chronograph Manufacture calibre Breitling 01, with a high-precision regulating organ developed by TUDOR and dedicated finishes, this movementwas the result of a recent collaboration between the two brands, which now pool their expertise in the design and production of certain mechanical movements.

If you would like to discover our full range of TUDOR watches, please visit us in store or browse our selection online.